Today’s post sheds light on a construction company that was fairly active on the Coast during the 1920s and early 1930s.  The projects the company was bidding on and constructing were and are landmarks in the communities of Gulfport and Biloxi. 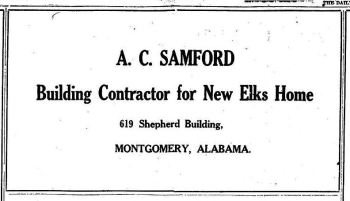 Amos Carl Samford was born in Rome, Georgia on Aug. 13, 1886. In the 1900 census, he was a young cotton weaver, while his father was a house carpenter.  He claimed exemption from the draft in 1917 because he had a wife and baby to support.  On the draft registration form, he listed he was a farmer who also did work for the postal service.  By the 1920 census, he was living in Macon, Georgia, employed as a construction superintendent working for a wage.  That experience he gained in a few years as a construction superintendent must have been valuable because, by the early 1920s, A.C. Samford began working on the Mississippi Gulf Coast as the A.C. Samford Construction Company.  Although the firm and its owner was busy on the Coast, it was headquartered in Montgomery, Alabama.  In the 1930 census, Samford was living in Montgomery, Alabama was employed as a “Contractor of Government Buildings,” and owned his own business.

Possibly due to the effects of the Great Depression on the Mississippi Coast, after 1930 Samford was spending less and less time on the Coast and more time in Montgomery, AL bidding on and building structures all over Alabama, and as far north as Pennsylvania.  The company was involved with work, albeit unknowingly, on the Manhattan Project in Oak Ridge, TN during the early 1940s.  By the end of the 1950s, the company would be located in Albany, Georgia, but was still bidding on and building projects on the Mississippi Coast.  A.C. Samford passed away in 1962, but I believe the company he founded continued to operate into the 1980s.  Are you familiar with A.C. Samford Company’s work in Mississippi? 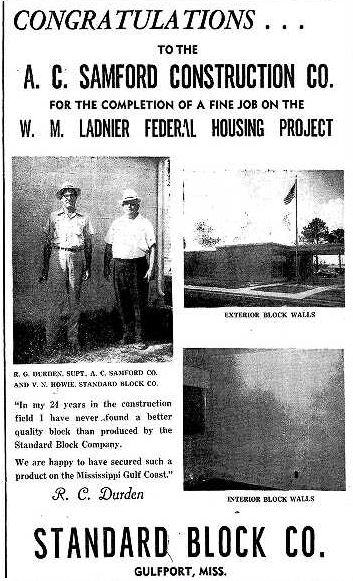