As one of the few people on earth who hasn’t yet embraced the smart phone fad, I have had cause to miss the conveniently located but humble telephone booths that used to dot our towns, shopping centers, gas stations, and even country bus stops. I saw recently that Arkansas has listed one of its last working telephone booths on the National Register of Historic Places. Installed around 1960, according to the National Register nomination, the Prairie Grove Airlight Outdoor Telephone Booth is

The previous wooden telephone booths were designed for indoor use, so the AOTB represented an evolution in telephone booth design in order to allow it to function better in more varied environments. Advertisements for the Airlight booth also touted the ‘tip-up directories’ that are in ‘easy reach’ and the ‘ample shelf for packages and handbags,’ both of which are present in the Prairie Grove booth.

The only telephone booth I can think of still hanging around in Mississippi is the red British type booth in downtown Jackson on Congress Street across from the Governor’s Mansion. I don’t know what brought that booth to Mississippi, but it hasn’t been a working telephone booth for as long as I’ve known it, and maybe it never was?

The earliest I’ve found mention of outdoor telephone booths in Mississippi is in 1954 (no coincidence, since the AOTB was introduced around then), with this Clarion-Ledger article saying that no-way, no-how would phone booths mar the appearance of Capitol Street. 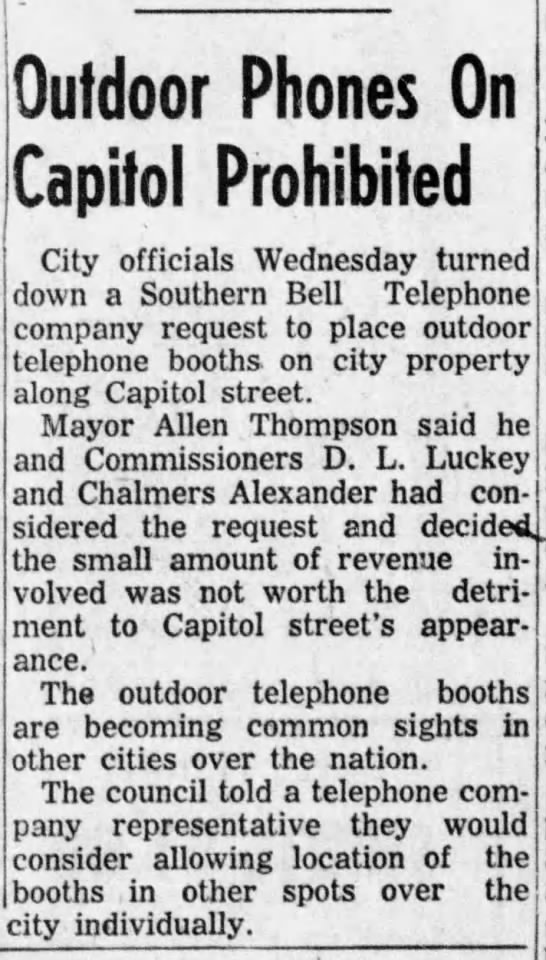 By 1968, the City Council had changed its tune on phone booths, even on Capitol Street, touting them as not just desirable for public convenience and safety but also as revenue-generators for the city.

The installation of 10 additional public telephone booths in downtown Jackson has been approved by the City Council.

The first booth was installed on a trial basis last Aug. 29, and its success has inspired the addition of more booths.

Ralph Atkinson, public telephone coordinator for Mississippi, told the council that income so far from the booth indicated a yearly revenue to the city of $200 from the single booth now in operation on the northeast corner of Capitol and Lamar.

He also told the council that the City of Birmingham collects a little more than $30,000 in commissions from the approximately 265 public telephones on the streets of that city.

The city receives a 15 per cent commission on the telephones paid monthly. The Southern Bell Telephone Co. installs and maintains the public telephone booths.

Atkinson said that after the 10 additional booths were installed downtown that more booths would be added as needed in other areas of the city.

Atkinson said orders for the booths were being issued Wednesday and that he hopes they would be installed within a month, some of them perhaps within two weeks.

The booths on Farish will be the walk up, shelter type, which takes up less space and are designed for narrow streets.

Atkinson said he had heard nothing but favorable comments about the trial booth on the Parisian.

He said the booths provide both convenience and safety to the public around the clock, giving people a place to make a telephone call after the stores are closed.

Atkinson also said it gave the city an additional source of revenue without the expenditure of money or levying of a tax.

The public telephone booths are being installed in all sections of Mississippi this year, he states.

The mention of all those Farish Street booths gave me an idea to look at the photos included in the Farish Street Historic District nomination from 1979, and sure enough, here is a scene from the corner of Farish and Oakley at the Crystal Palace showing what appears to be a real live Airlight Outdoor Telephone Booth. Today, the Palace is still there with a new facade, but the phone booth, bless its heart, has been replaced with a trash receptacle.

The saddest thing about the disappearing phone booth is that there is even now a whole generation of young people who don’t understand one of my favorite snarky comebacks: “Here’s a quarter, call someone who cares.”

Maybe you’ve had a sighting of a Mississippi telephone booth still standing somewhere forlornly, waiting for someone to call someone who cares. If so, let us know where it is!