Several preservation stories have popped up in the last couple of weeks, enough to squeeze in a Thanksgiving week news roundup to keep all y’all on top of things.

In Oktibbeha County, which recently consolidated its schools with Starkville’s, the “County continues to eye future uses for old schools.” Former schools in east and west Oktibbeha County are under consideration for community uses and counseling services, according to the article, which mentions Moor High School in Crawford, East Oktibbeha High, and West Oktibbeha High, all of which were abandoned during the consolidation. My understanding from friends who live in Starkville is that these are 1950s Modernist campuses.

Down in Ocean Springs, a 1950s industrial building on Government Street downtown, most recently called the Swingster Building, was torn down by the county with city cooperation, according to WLOX, “Iconic Ocean Springs building demolished.” Built under the Balance Agriculture With Industry (BAWI) program, the building originally housed a garment manufacturer before being leased to the Swingster Company, which did monogramming. But according to a Sun-Herald article from October, it became beloved in Ocean Springs and known as Camp Victor after Katrina, when the City used it as a supply warehouse and distribution center and a barracks for up to 200 volunteers at a time. Its concrete block exterior was covered in colorful murals, which both articles mention but don’t give any history about who painted them and when. The main reason I started the “Industrial Mississippi” series is to highlight these functional buildings that once served as a hub of their communities and are now vacant and almost anonymous. This one won’t have a new use, but I do hope that we can bring life back to at least some of our BAWI landmarks around the state.

In Jackson, the city’s oldest park, Smith Park, has recently had many trees cut down, apparently at the behest of Downtown Jackson Partners, a non-profit group that oversees the Downtown Business Improvement District, according to a Clarion-Ledger article. This is supposedly the first phase of a “park makeover” that would transform the shaded square into what appears to be an unshaded open space best used for festivals or on the two days in Spring and Fall when it’s fun to sit in the sun.

“The goal of the Smith Park renovation is to create a world-class public space that will help spur development in downtown Jackson while enhancing the Capitol Complex,” said John Ditto, who chairs Friends of Smith Park.

DJP President Ben Allen said roughly 32 trees were removed. He added that when the experts examined the park, they only found 17 trees that were 100 percent healthy out of the roughly 80 trees in the park.

“Smith Park sits at the epicenter of our state, and so it’s a place that belongs to all Mississippians,” Allen said. “We invite everyone who has an interest in the success of our capital city to be part of this important project.”

The renovation proposal calls Smith Park, in its current form, an “eyesore,” and includes improvements such as a new stage, trees, tables and benches, sidewalks and light poles.

Photos of the tree-culling indicate that magnolias and crepe myrtles were cut, along with some genuinely dying water oaks. Cutting a magnolia tree in Mississippi is very bad ju-ju.

Since one of my favorite lunchtime activities on nice days has been to eat lunch in the shade next to the running river, I can’t say I like this proposed plan, and furthermore, I don’t like starting plans that don’t have any funding in the bank. This is supposedly a $2.5 million project that DJP hasn’t gotten from the Legislature the last two years it has asked. I’m not saying the park doesn’t need work–the river hasn’t run for a couple of years, and apparently a new pump would cost $75,000, but that’s a lot less than $2.5 million by my estimation. Some of these trees did need to come down, the concrete river needs a new lining, the City needs to replace the many broken concrete tables and seats. But the invitation for participation in the article above seems to be an invitation to get on board with plans that have already been made rather than have a voice in whether the park needs such a complete makeover.

We’ll keep a watch on this and see how it develops. 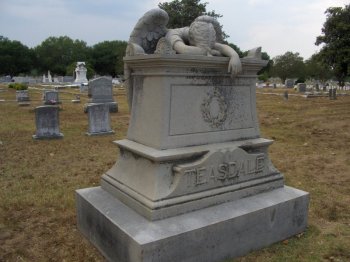 In Columbus, historian Rufus Ward calls attention to the plight of the antebellum home known as the Teasdale House, or “Taynor.” It was built in 1852, but became the home of Rev. T.C. Teasdale, prominent pastor of First Baptist Church from 1858-1863 and leading revivalist in the late nineteenth century. Teasdale is buried in Friendship Cemetery in Columbus under the famous weeping angel monument.

Mr. Ward starts his popular regular article “Ask Rufus” with a simple statement: “One of Columbus’ historic homes needs a friend.” And while he doesn’t specifically say why, my local sources say that there’s a move afoot in the city government to have the house torn down for lack of maintenance. The photo caption states, “Though once considered one of Columbus’s most significant historic homes, Taynore, the Rev. T.C. Teasdale’s home, is now almost forgotten.” Taynor, located at 806 3rd Avenue, North is listed on the National Register as part of the Columbus Central Commercial Historic District. It’s not clear who owns the property or if it is for sale. 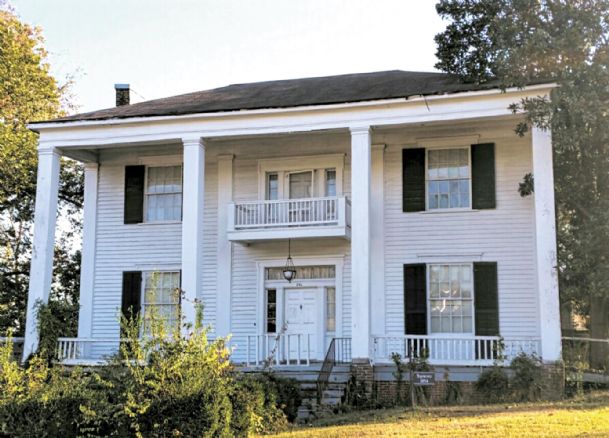 Let’s end on a good note for Thanksgiving. This nice story also comes from Columbus, “Historic hotel building changes hands: New owners eyeing apartments, restaurant, boutique hotel.” Developers Chris Chain and Tommy Howard, recently bought a large downtown commercial building from its long-time owners, the Price family. The two-story building in question is at the corner of 5th Street, South, and Third Avenue, South and was built between 1905 and 1910 as the Stone Hotel, according to the Sanborn maps.

The building is included in the Columbus Central Commercial Historic District, and the National Register nomination describes it as “cinder block rusticated and vermiculated to resemble ashlar stone.” With that early of a date, I don’t think these would be cinder blocks but true concrete blocks, possibly made on site with a Palmer press, which is, of course, very exciting to those of us who get excited about early concrete block buildings. Even more exciting, though, is to hear that this building is going to have a new life:

Both Howard and Chain were interested in restoring the buildings and particularly in putting in a boutique hotel where the upstairs apartments were.

They said they don’t know how many rooms the hotel might be, but both think that with downtown events and restaurants, a boutique hotel is exactly what the area needs. They said there would likely be renovated apartments upstairs as well.

Chain said there’s a possibility of a new restaurant, too. He said the restaurant could go in a back room, downstairs, facing the parking lot behind the buildings. If a restaurant doesn’t work out, it could possibly be a space to rent out for events, he said.

Chain also envisions an opening from Fifth Street to the parking lot behind the buildings with retail stores lining both sides. Other Fifth Street-facing fronts could contain offices, he and Howard said.

The renovations will take months — probably a year — Howard and Chain said, and they still don’t have all the details ironed out.

Good luck to all involved on this project!