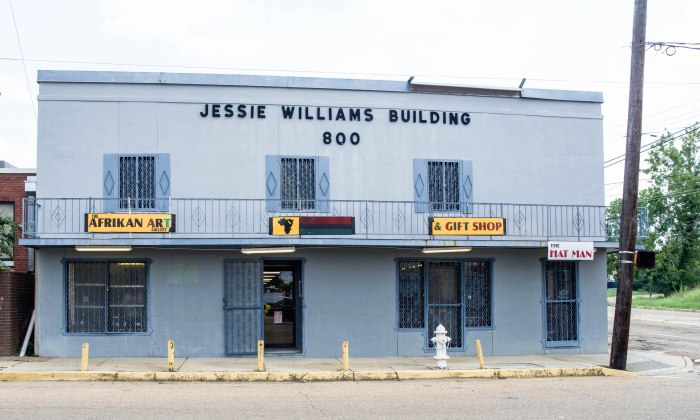 Congratulations galore belong to Mr. and Mrs. Jesse [sic] Williams, head of the Paris Cleaners in Jackson.  They moved recently into their brand new $50,000 home.  Success has been and is yours! (Anselm J. Finch’s Mississippi Snaps, The Pittsburgh Courier, May 26, 1945, p. 14)

Mississippi Department of Archives and History identified the commercial building at 800 North Farish Street as a 1939 construction date, remodeled in 1981.   The nomination for the Farish Street Historic District identified it as a “stucco over concrete block, H-Plan” (Adele Cramer, MDAH, 1979).

Victor H. Green’s The Negro Motorist Green Book– traveling accommodations for African Americans from 1936-1967–first listed Paris Tailors in 1949, and it continued in the Jackson listings until 1955.  Mr. Williams ran regular advertisements in the Clarion-Ledger, and often ran ads seeking “delivery men” and “boys with bicycles.”  He offered pick-up and delivery, and “polarized cold storage” for furs.  One of the most creative ads was services for “bachelors and bachelor girls” which included mending, darning, and laundry services.  The business was successful enough that they opened a second cleaners on 3308 Bailey Avenue.

Following the remodel/renovation, it was dedicated in 1982 as the Jessie Williams Building.