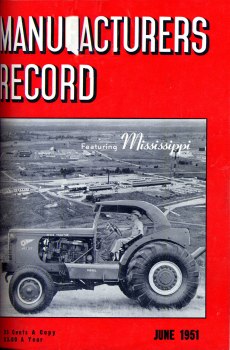 The 1951 Manufacturers Record had this to say about the enormous manufacturing complex that stood on Livingston Road near what is now the Jackson Medical Mall until just a couple of years ago.

Mississippi boasts the world’s most modern and efficient cabinet plant, that of Mississippi Products, Inc., which turns out radio and television cabinets for the big-name companies, in addition to producing sewing machine cabinets and kneehole desks. Its mile-long production line begins with the dry lumber and veneer logs, and is manned by 1,600 Mississippians, who four years ago had never seen the inside of a cabinet plant. All skills were developed from scratch in this plant, which utilizes over a million board feet of Mississippi timber each month.

The plant later became Hood Furniture Company, but stood vacant for a long period of time before recently being mostly demolished, a process that took a few years. There was some talk maybe 10 years ago about a big new housing development going on this property, but I suspect that was a victim of the bursting of the housing bubble in 2008. Still standing on the site as of 2016 are a section of the original two-story brick building and some interesting concrete pavilions that probably date to the 1960s or later. Does anyone know when and why Mississippi Products closed? (I’m presuming the company currently known as Mississippi Products is not related?)