I had always thought the term “Aeroplane” or “Airplane” Bungalow was a modern term, one of the many bizarre descriptions that are a lay person’s terminology or inscribed by super studious architectural historians to describe an architectural trend.   So imagine my surprise when I ran across a period use of the term on a structure that I recognized.  The early description of an aeroplane bungalow is characterized by a very low pitch roof.

“This is one of the new “Aeroplane” bungalows, a name which has been aptly given to the almost flat-roofed structures which have become so popular during the last few months.” -Henry Menkin “A New Aeroplane Bungalow.” The West Coast Magazine February 1912: pages 508-509. Print.

Henry Menkin (sometimes published as Henry Menken) was one part of the duo suitably named “Bungalowcraft,“ a house plan company located in Los Angles, California. Publishing their first self titled plan book in 1908, Menken served as “Arranger and Editor,” while H. A. Eymann served as “Designer and Publisher.” Bungalowcraft had well established their bungalow credentials by the time Menken penned the aeroplane bungalow articles in early 1912.  I do not know if Menken was the originator of the term but it is the earliest use of aeroplane bungalow I could find. Merriam-Webster cites the term “aeroplane” as first being used in 1873, where as “airplane” was first used in 1906, so I think its safe to hypothesize that the use of “airplane bungalow” archtype would not predate 1906.

In 1921, plans for an aeroplane bungalow appeared in the Times-Picayune.  A photograph, and floor plans were accompanied by the following description.

Another Stucco Beauty – Plan 1085 To you who may be seeking something exceptional in the way of a home, Plan 1085 will strike an appreciative chord.  Here is a house that will grace any neighborhood and would do an honor to the Garden District of New Orleans.  This house contains two bedrooms, a living room, dining room, breakfast room and kitchen, to say nothing of the aeroplane sleeping porch, that’s a dream in itself.

This plan originated in a 1921 Southern Pine Association published plan book, of which the home styles were primarily craftsman or colonial revival influenced.  The plan book somehow caught the eye of syndicated newspaper columnist Fredrick J. Haskins.  Upon his request the Southern Pine Association prepared an edition of the book  for free distribution through newspapers represented by Haskins.  This is likely how the plan ended up in newspapers across America. 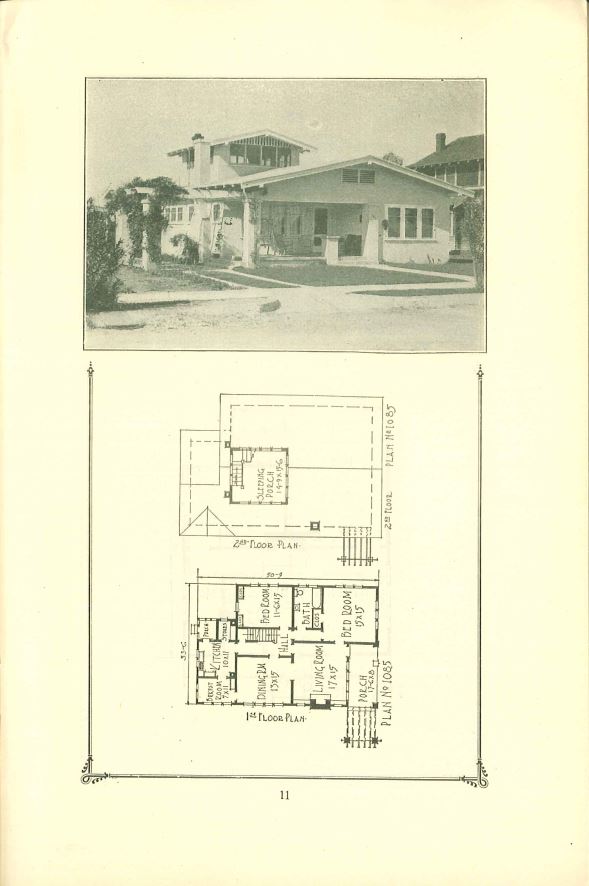 Aeroplane Bungalow. As it appears in Modern Homes for distribution through newspapers represented by Fredrick J. Haskins. Published by the Southern Pine Association. 1921

Giving the home a bit of international flare, the plan also appears in a c.1926 French book titled Maisons de Campagne sans étage et bungalows.  This book was part of the Tulane University’s Bungalow exhibit last year, and was accompanied by this explanation.

French Garden City leader Georges Benoît-Lévy (1880-1971) greatly admired the New Orleans bungalows he saw in manufacturers’ pattern books. He obtained photographs and plans from New Orleans and published his compilation as Maisons de Campagne sans étage et bungalows. His schemes were copied directly from Southern Pine Association catalogs. [While] This “aeroplane bungalow” was built in Biloxi, Mississippi. It is not known whether it was ever constructed in France.

The Tulane exhibit also credited the design of this aeroplane bungalow to architect R.B. Williamson, with the description of the structure as a “Habitation for a Hot Climate, with a “Plein Air” Sleeping Porch.” 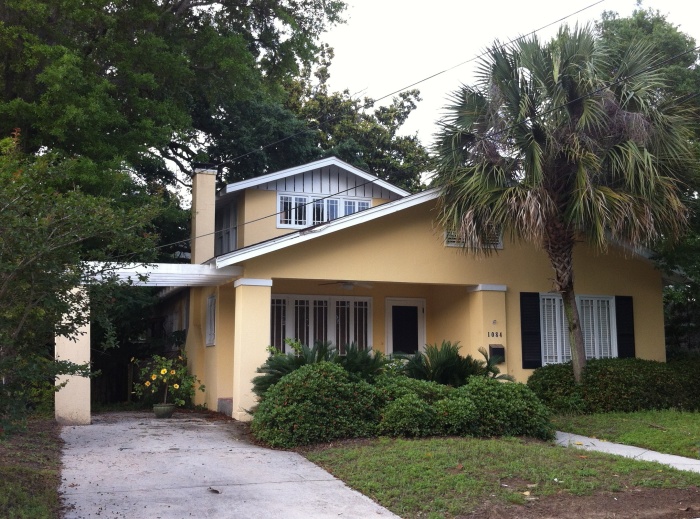 A second 1921 Southern Pine Association publication, that was jointly published with the Architects’ Small House Service Bureau of Minnesota, Inc., described an aeroplane bungalow in the following manner:

THE aeroplane type of house is given that name from the fact of the likeness of its roof to the wings of an aeroplane.  The roof has a very low pitch and is covered with canvas with prominent ridges, which increase the similarity to the aeroplane.  The projection of the cornice is surmounted with a large cupola, having a remote resemblance to the cabin of the aeroplane operator.  This type of house has been a great favorite in California.

Do you know of any Mississippi bungalows that might fit the description of having a low-pitched roof, and a smaller second floor, possibly containing only one or two rooms?  If so let us know!