As in the rest of the country in the late nineteenth century, Mississippi’s construction trades were evolving from one-man operations and small partnerships to large building firms. Two men at the forefront of this development were Meridian’s Charles M. Rubush, a Union veteran who moved to Mississippi during Reconstruction, and Jackson’s F.B. Hull, a Confederate veteran. These men began their careers in the old apprentice system, but built the multi-faceted firms that were able to erect the large public buildings and “high-rise” commercial buildings that clients were demanding in this boom period. Thankfully, as with Hull, Dunbar Rowland (the first director of the Mississippi Department of Archives and History) included Rubush in his extremely useful Contemporary Biography, published in 1907. Rubush is buried with many of his family, including an infant, in Meridian’s Rose Hill Cemetery.

Among the list of his known buildings on the MDAH Historic Resources Database, his best known are probably the Grand Opera House (Riley Center) and the Marks Rothenberg Building in Meridian. He also built MUW’s Orr Building in 1884.

For a special treat, next time you’re at MSU, sneak over to the side yard of the Cobb Institute where you will find evidence of Rubush’s early contributions to that institition written in stone.

Rubush, Charles M., of Meridian is known as one of the leading contractors and builders of the State of Mississippi where he has resided since 1868. He has erected many important public and business buildings in divers sections of this commonwealth and in addition to his contracting work he also does a large business in the handling of all kinds of building materials and supplies. Mr Rubush was born in Indianapolis, the beautiful capital city of the State of Indiana, March 11, 1844, being a son of Rev. George and Susan Dinkle Rubush, the former a native of Virginia and the latter of Pennsylvania. Rev. George Rubush was a clergyman of the Methodist Episcopal church, and for a time he was intimately associated with Rev. William Gannaway Brownlow of Tennessee, known as the “fighting parson” and also as “Parson Brownlow” and one of the notable figures in the history of that State, of which he was governor during the reconstruction period. Rev. George Rubush died in Hamilton county, Ohio, about 1878, and his wife passed away in 1880.

Charles M. Rubush secured his educational training at New Haven, Ohio, and during the Civil war he was a member of Company D, Seventeenth Indiana mounted infantry, in Wilder’s brigade. He rose to the rank of sergeant and took part in the various engagements in which his brigade was involved, including the battles of Chickamauga, Missionary Ridge, the campaign from Dalton to Atlanta, and innumerable minor engagements, having been in service for a period of four years. Mr. Rubush served a thorough apprenticeship at the trade of brickmason, becoming a skilled workman, and he followed the work of his trade in Indiana and Ohio after the close of the war, but in 1868 he came to Meridian, Miss., where he has since maintained his home and business headquarters.

Upon coming to Meridian he established himself in business as a contractor and builder, and in this line of enterprise his reputation is second to that of none in the State. He erected the main building of the State Agricultural and Mechanical college, at Starkville; the original building of the Mississippi Industrial institute and college, at Columbus; a number of the best court houses in the State, including the new court house of Lauderdale county, which was completed in 1905, at a cost of about $125,000 including furnishing; while he has erected the greater majority of the principal business blocks of Meridian, besides many of the finest private residences in that and other cities of the State. Fidelity to contract and upright business methods have characterized his career and thus he has maintained a strong hold on public confidence and esteem. His building material business was established about 1890, and has become an enterprise of much incidental importance, while it affords him the best of facilities in his individual contracting work. In politics Mr. Rubush is a stanch Democrat, and he has completed the circle of the York Rite Masonry and is identified with Homasa Temple of the Mystic Shrine, of which he was potentate two years; and with the Benevolent and Protective Order of Elks. On Oct. 18, 1871, Mr. Rubush was married to Miss Martha Wedgeworth, daughter of Rev. Joel and Margaret Smith Wedgeworth, of Alabama, and they have seven children: Pearl, wife of Charles Girten, of Beaumont, Tex.; Charles M. Jr.; Ruby, wife of E.S. Bostic; Jodie; Zula, wife of William Perrv Elmer; and Hazel . 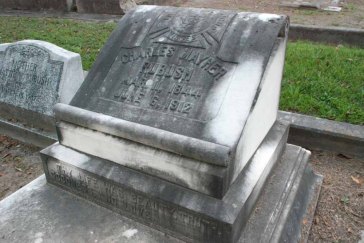 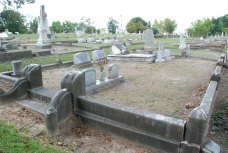