New Deal and 101 Places in One: Church Street School

Remember the “101 places in Mississippi to see before you die” list?  It’s been a while since we have stopped by to see one on Suzassippi’s Mississippi, what with hunting down all the New Deal Administration buildings in the state.  But wowie zowie, two for the price of one this week!  The Church Street School in Tupelo came in #3 in the regional polls, with 115 votes, or 8% of the total for the area, and thus earned a spot in the final cut of 101 Places.

In addition, it has been described as

…one of the best examples of the Moderne style of architecture in Mississippi. It was designed by the Jackson, Mississippi firm of Overstreet and Town, whose work was recognized internationally. (Susan M. Enzweiler, 1991, nomination form for the National Register of Historic Places)

Take a look at the nomination form for additional detail about the building–it’s worth the time it will take. The school was also one of the schools built under the New Deal Administration. Enzweiler explained

The modern essence of the design relied not only on this progressive architectural strategy but also on the aesthetic qualities of the building material, i.e., concrete. Overstreet and Town began to use reinforced concrete as a building material because during the Depression buildings had to be constructed with few funds, but a large number of unskilled laborers. They quickly realized that the material was perfect for achieving the simplicity of form intrinsic in the architectural styles of the day. …streamlined forms that reminded one of progress, speed and efficiency…that would promote renewed hope and confidence in the future. (Sachs, 1986, as cited by Enzweiler)

A peek through the windows of the front doors was an unexpected delight.  While simplicity may have ruled in this “ultra modern” design (Hays’ description according to Enzweiler), the entrance to the building and the auditorium is stunningly beautiful.  Although it is credited to the WPA (Works Progress Administration) in the Mississippi Department of Archives and History Historic Resources Inventory database, it more likely was constructed under the PWA (Public Works Administration) which built schools during the period of 1933-1938, before ending in 1939. WPA focused more on direct employment of the unemployed, whereas PWA was engaged in larger building projects including schools.

Check out building details below! 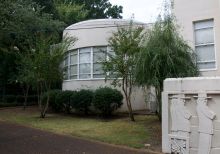