Airliewood is listed on the 101 Places in MIssissippi to See Before you Die list…but will not be able to be seen without an invitation onto the grounds.  Iron fences, and mature trees combine to make it primarily hidden from street view, however, you can see other photographs here. 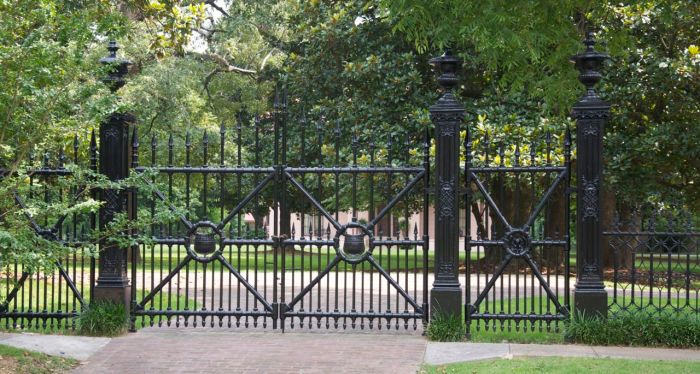 The fence and gate are a replica of the one at the US Military Academy at West Point, and credited to Wood & Perot of Boston.

This is the most visible exposure of the house from any angle along the front.  The Gothic Revival house was built in 1858 for William Henry Coxe and used as headquarters by General Grant during the Civil War.  It has been called Airliewood since 1938, when the then owner, Jean Burns Dean, named it for her father’s plantation, Airliewood Farms.

The design is most closely associated with illustrations in Philadelphia architect Samuel Sloan’s Gothic Villa Design Forty Fifth in his book The Model Architect (1852-53).  His Romantic “ideal villas” were copied and built all over the United States.

The house is plaster exterior scored to give the look of stone.  I confess to seeing it and thinking “Wow, that looks like concrete blocks.”  The house was restored/renovated by Joe and Kathy Overstreet at a cost of $5 million.