Home › Architectural Research › When You Absolutely Positively Have to Know What’s a Volute?

When You Absolutely Positively Have to Know What’s a Volute?

Recently I took a second look at the sizable number of architectural dictionaries sitting on my shelves, most within easy reach arm’s length of my computer desk. While it may seem that I know just the right architectural term for every minuscule part of a building, in fact, I regularly pull my architectural mumbo-jumbo out of these books. It’s amazing what you can learn by having one of these handy, whether you’re standing on a street corner looking at a building, or more likely looking at a picture of a building and thinking, “I wonder what that thing up there at the top is called?”

So, in case you’re putting together your Christmas list really early, here’s a quick run-down of the architectural dictionaries I find most helpful and which you might want to add to your library.

A Field Guide to American Houses, by Virginia and Lee McAlester

Commonly referred to as “McAlester and McAlester,” this book should be on your shelf and should be well-worn. This is non-negotiable for any American interested in American architecture. Published in 1993, it breaks down each major architectural style and shows you in drawings and photos what distinguishes each style. Unlike some architectural dictionaries, it spreads its love all over the country, not just the East and West Coasts, and there are even several Mississippi examples. My only wish would be that it would be updated to delve a little more deeply into the post-World War II era, but even still, this book is a must!

The Elements of Style, by Stephen Calloway and Elizabeth Cromley (1996)

A visual feast for anyone who loves design–not just of architecture but also furniture and other related designed objects. Divided into periods, with beautiful images illustrating each aspect of style for that period, including doors, windows, mantels, etc. I don’t have the most recent edition, published in 2005, which gets into the Post-Modern period in more detail than earlier editions. I bought this new at Lemuria Books in Jackson, which has an excellent architecture section, and a pretty-much full Mississippi architecture section.

My go-to book for definitions of any and every word I might encounter in architecture or preservation. If I could get one wish granted, it would be that more entries would include an illustration. I got my copy from the huge used book sale that the Welty Library here in Jackson put on a few years ago. On the one hand, I was happy and astonished to get so many architectural books for my library at a dollar a pop; on the other hand, it was more than a little disturbing to see how many classic and still very relevant architectural works they were cleaning off their shelves.

An oldy but a goody. I recently bought this one from abebooks.com and found that it had been discarded by the Dartmouth College Library, so I guess all the libraries are throwing out their paper books. It’s quickly become one of my favorite, possibly surpassing the newer Dictionary of Building Preservation, mainly because it is so thoroughly illustrated with beautiful and annotated line drawings. I won’t say that every entry is illustrated, but it sure seem like more are illustrated than the DBP. I also own a later book by Harris, American Architecture: An Illustrated Encyclopedia (1998), also good, but seemingly less illustrated and therefore outshined, for me at least, by the Sourcebook. POssibly I’m just biased since my Sourcebook is hardcover while my American Architecture is paperback.

This hand-sized book is meant to accompany a visitor who is using Nikolaus Pevsner’s amazing guidebooks Buildings of England, Scotland, Wales and Ireland. As such, it’s not really meant to be a comprehensive dictionary and it is heavy on Medieval and Renaissance buildings, which we don’t have in Mississippi (or so they say). It does have a few beautiful photographs and some line drawings, but it is pretty light on illustrations, which means its main use for me is to check how a particular term is or was used in a British context. Meaning I don’t use this book very often, but isn’t that cover gorgeous? A website that extends this book a bit is Looking at Buildings: Created by the Pevsner Architectural Guides. 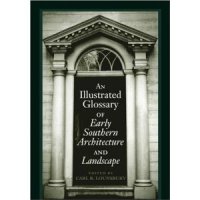 Another more specialized dictionary/glossary, this one clearly meant for a more scholarly audience, with chronological usage notes for many of the entries. If you’ve ever wondered what function a “breastsummer” or a “prize post” filled in a building, this is the place to find out. The “Southern” of the title is Eastern seaboard and heavy on Colonial and Early Republic structures, but it’s a valuable resource for understanding how an architectural term was originally used and to see how it has evolved.

A central problem with architectural dictionaries is that usually you’re searching for the right word to describe a feature that’s in front of you, not, as in regular dictionaries, looking up a word you’ve seen to discover its meaning. The following books attempt to solve this problem with a more visual approach, to varying degrees of success. I’ve noticed that Google is working on an app that would allow you to take a picture of something with your handy smart phone or tablet and have the Google Image database zip through and see if it finds any matches to help you identify it. This feature will be very useful when it gets developed, but until then, you probably will find one or more of these books more helpful.

A Visual Dictionary of Architecture, by Francis D.K. Ching (1997)

This book is divided up into various themes arranged alphabetically, such as “Ceiling” and “Masonry” and within that theme, it’s all line drawings of various parts of a building or construction material or style, with architectural terms and definitions out to the side. This was the first such “visual dictionary” I got, so I’ve used it quite a bit, and I think it’s strength lies especially in post-WWII architecture and engineering systems. This isn’t a bad thing, since the weakness of most of these other books is in that period, and I’m always looking for help in describing these huge sprawling buildings of the Modern era. Strangely, though, I do find myself using the index in the back of the book at least as much as finding what I need to find through the visual illustrations.

How to Read Churches: A crash course in ecclesiastical architecture, by Denis R. McNamara (2011)

My most recent acquisition, I hope this book will help those of us who didn’t grow up in churches with naves, altars, screens, or apses talk to those high-church friends who did. It’s helpfully divided into styles and floor plans, and also breaks down the various materials and spaces that make up churches, and includes drawings to illustrate each point. Unlike many architectural dictionaries, this one is clearly meant to travel, small enough to carry around, and although not quite tiny enough to put in a regular-size pocket, you can whip it out when you need to figure out why the guide keeps talking about the “choir” but no one is singing, and then nod knowingly the rest of the tour. 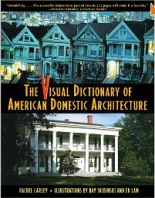 I’ve only just bought this book, although I see it’s been out for over 15 years. This book, primarily arranged by styles, seems like a blending of the approach of McAlester and McAlester, who took a purely stylistic approach, with more of a visual dictionary approach. McAlester and McAlester start each of their chapters, such as “Queen Anne” or “Craftsman” with a textual history and explanation of the style, while Visual Dictionary of American Domestic Architecture jumps straight to line drawings of “typical” examples of each style, with sidebars of text about the style. The line drawings are well-done, but I think the index could have used more beefing up (for instance, there’s a nice image of a cartouche on p.154, but “cartouche” is not in the index, so I’m not sure someone would be able to find it other than through serendipity). The book does come farther into the late 20th century than does McAlester and it has some very helpful drawings of construction details such as “Anatomy of a Brick Veneer” and “Anatomy of a Balloon Frame.”

So, your assignment, should you choose to accept it, is to give the definition of “Volute” from your own favorite architectural dictionary and tell why it’s your favorite.

Like Loading...
‹ New Year’s Resolutions for Preservation: 2012
Tanks for the Memories -or- Travelling by Tank in Mississippi ›