History of Art in MS: Lauren Rogers Library and Museum

It’s time to check into our most recent Book Quotes series, the History of Art in Mississippi, published in 1929. Today’s segment, from the chapter on the architecture of public buildings, is devoted exclusively to the Lauren Rogers Museum in Laurel, a building that combines classically proportioned architecture with a respected art collection. It’s also a building that someone has suggested for the 101 Must-See Places in Mississippi. Unfortunately, I’ve only been inside the building once, and before the age of digital cameras, but based on the description of the interior below, I see that I need to pay another visit soon.

Surprisingly, given the book’s focus on architects, the text fails to mention that the building was designed by our old friend from New Orleans, Rathbone Emile DeBuys, also the architect of the Gulf Park campus, among other Mississippi landmarks.

In case you’ve missed the first few excerpts of the same chapter:

The Lauren Rogers’ Library and Museum of Art

On the east wall of the interior of Lauren Rogers’ Library at Laurel is a tablet, designed by Tiffany, which tells the story of the library in simple bronze:

Lauren Chase Eastman
For the Benefit of
This Community and State
Eastman Memorial Foundation
In the year 1922
Laurel, Mississippi

Mr. Eastman gave the land and buildings and established a foundation for the maintenance of a Library and Museum of Art. On the site of this library was to have stood the home of Lauren Rogers and the original foundations have been retained, with, however, an entirely different floor plan.

Georgian style of architecture was chosen for the building and for the exterior, local brick was used with Indiana limestone for the trim. Laid in wide joints, the work suggests an earlier period when brick laying was more of a master craft than it is today and delicacy and strength are to be noticed in the exquisitely proportioned columns upholding the Goergian roof.

Watson and Walton who planned and decorated the interior of the building, chose the late 17th and early 18th centuries in the colonies, as a period well suited for this home of many books. In paneled oak and moulded plaster, in hand-wrought iron and hammered brass and incarefully chosen furniture, have the old craft traditions been preserved.

The tone of the walls is a warm brown but quite different from the usual stained effects, for oak with natural checks and knot holes has been used, thus suggesting the vigor of early American woodwork. Upright and horizontal panels, in the 17th century manner, cover the walls where there are no book shelves. The color scheme is one of browns and ivories, heightened by the glint of metal-work and the color of book buildings. At the windows are curtains, softening the light but shutting out none of the outside landscape. The color of these curtains is neutral with a slight glow, which blends well with the walls and ceiling and the floor of cork with its border of black Belgian marble.

The room built to house Mr. Eastman’s collection of paintings, and the galleries of the new annex, are separated from the library by gates of wrought iron and hammered brass, the work of Samuel Yellin, who stands at the head of his craft in America. In the grilles beneath the windows, in the smaller gates of the enclosure, in the railings and balustrades, hinges and locks, the work of his master hand is seen.

The plan of the building is very simple, comprising the main or central room, the reading room, the room for Mr. Eastman’s collection, and the long corridor leading to the new annex, which provides six galleries, office and work rooms.

All the old furniture in the building is most attractive, and also some fine hand-made reproductions inspire respect for the work of modern craftsmen. Particularly interesting are the many Windsors of different models, and the refectory, tavern, butterfly and gate-leg tables. Other pieces claiming the attention of the student and collector are the pieces of 16th century French furniture arranged in the corridor.

The hand moulded ceiling in the central room of the library is symbolic of the fruits of the earth, and consists of a central medallion and tracery border exectured in low relief. In the northeast corner, the earth is represented by a rendering of the western hemisphere from which runs the main vine, bearing the fruit and grains which sustain and give pleasure to man. The central medallion consists of a spirited treatment of the signs of the Zodiac enclosed in an emblematic scroll of the wheat and the grape, and from this medallion is suspended a bronze chandelier, designed in the style of the candle fixtures of the 17th century. Three tiers of electric candles give a modern illumination, but hold true to the beautiful old type. And similar, but consisting of two tiers of candles, is the chandelier in the reading room. The tables are lighted by bronze lamps, in the style of tall and sturdy candle sticks, equipped with metal shades. 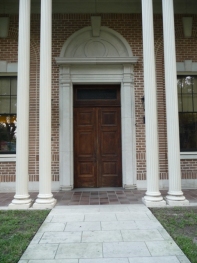 Soon after the building was opened to the public it was seen that it was not large enough to accommodate the growing collections and, in 1924, Mr. Eastman gave a further gift of $175,000 to provide for the building and support of a large addition. The new part of the building is more than double the size of the original building but conforms in style and material to the unit erected in 1922.

The purpose of the Eastman Memorial Foundation is to furnish facilities for the operation of a reference library, the collection and exhibition of pictures, sculpture, curios and other objects, and the issuance of publications for the benefit of the state and community. And, while the work of the Foundation is just in the infancy of its splendid achievement, the high purpose which made this memorial extends its mighty and beneficent influence over an ever-widening circle.

Like Loading...
‹ To New Orleans and Back
MiMo No Mo? The Sun-n-Sand in Downtown Jackson Needs Our Help ›