While I was in Chattanooga last week, I decided to see if I could find the gravestone of Chattanooga architect R.H. Hunt, who designed a wealth of landmarks around Mississippi and throughout the Southeast from the 1890s through the early 1930s. I found an extensive obituary from 1937, and it told me that he was buried in Forest Hills Cemetery, south of downtown. Googling the name I was pleasantly surprised to find that the cemetery not only has a searchable database, it also posts detailed maps online that allowed me to find Hunt’s grave virtually in about 5 minutes flat. It’s always so shocking when research doesn’t take nearly as long as you expected. 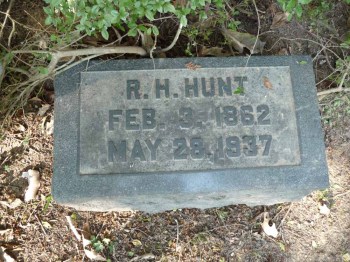 I was disappointed to find on arrival though that Hunt’s grave marker is overgrown by a bush, and is not what I had hoped would mark the grave of such an important architect.

By my count, Hunt designed at least 100 buildings in Mississippi, almost all of them major landmarks in their communities. He especially influenced the university campuses around the state, including the MUW, MSU, USM (designing both buildings and the campus plan), Mississippi College (also campus plan), and Blue Mountain College. His work extended from small-town banks to massive churches, city halls and courthouses.

Today, I’m posting pictures of just a few of Hunt’s Mississippi buildings, and tomorrow’s post will include pictures from his home base in Chattanooga, where he brought the first skyscrapers to the city, along with many other landmarks (just to whet your appetite: he embraced the Art Deco style late in his career).

Like Loading...
‹ The White House Waits to Bloom Again in Biloxi
More About R.H. Hunt, and an Art Deco Delight ›