Last time all the buildings featured one type of block face.  Today the two buildings we will look at feature two or more types of block.

By the turn of the 20th century a block machine that could make a different block face simply by changing the faceplate is common place. 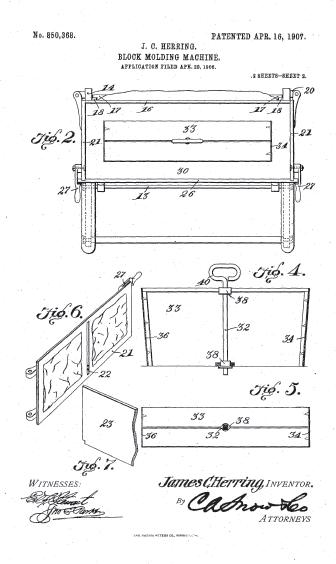 ~1907 patent for a concrete block machine.

Built some time between 1909 and 1914 this handsome cottage on Lameuse Street makes use of two types of block.  The blocks are standard size with a face that is approximately 8″ x 16″.   A rock face block was used for the quoining and a continuous lintel, and a bush-hammered face for the majority of the wall plains.  While the brick skirt may not be original, the building still shows the visual beauty that concrete block can add to a structure.

A well-appointed house, the Bowen House showcases the flexibility in designs of concrete block.  According to the city of Biloxi plaque this house was built c. 1900, but does not show up on any Sanborn map till 1914.   It utilizes a cornucopia of block types and other cast concrete features such as balustrade and columns, all set in a wonderful raised bead mortar joint.  I believe I counted a whopping seven different 8”x 16” block faces plus several different size block.  These seven include: Rock Face, Standard Plain Face, Rusticated Face, Cobblestone Face, a variation on the cobblestone block depicting elongated stones, a bizarre block featuring fractal lines and dashes, and an attempt at a vermiculated face.  A 8”x 32″ block depicting an eight petal flower with stem, four seed pods and two leaves, is used as a belt course several places around the building.  The Cobblestone Face, the variation on the Cobblestone Face, the bizarre block featuring fractal lines and dashes, and the attempt at a Vermiculated Face seem to be after thoughts and only occur on the west-facing two-story bay.  (I apologize for the odd posting of photographs.  I am still learning WordPress). 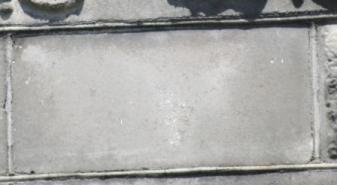 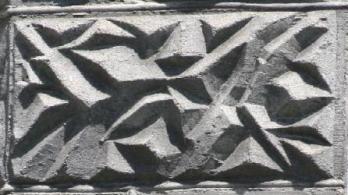