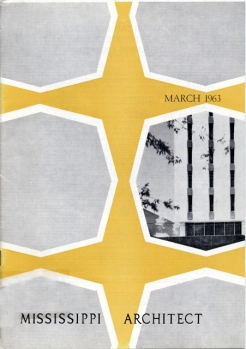 The editor of this 2-year run was William R. Henry, who we memorialized here on MissPres back in March. Each issue follows a general pattern: an editorial covering some aspect of the architectural profession, an article about a recent Mississippi building project, and several articles about architecture in other parts of the country. The magazine seems to have been produced on a template provided by Construction News of Mount Vernon, NY, and these national articles were probably their contribution, along with layout and printing, I assume.

Through mostly legal means and with the help of industrious MissPres readers, I’ve managed to start scanning these issues, and I’ll reprint the Mississippi-related articles and editorials in serialized form as they were originally. I’ll also begin posting the full magazine in pdf format under the new page called “MSArcht,” which also has an index to all the articles.

This is a really exciting project that I hope will open a window on the mid-1960s, when the architectural profession in Mississippi was growing from the smaller partnerships into the large firms we know today. The architectural projects were also growing from single buildings into full-scale developments and high-rises. I hope ya’ll will enjoy getting to know the architects and buildings of the period as much as I have.

Without further ado, here’s the editorial from the first issue of Mississippi Architect, published in March 1963.

Architecture Is Your Business

If it sounds presumptuous to say that architecture is your business, consider this : You are born in architecture and you die in it. You live and work, play and worship in it throughout your life; there are few times in your life when you neither see it it or feel it. It affects your movements, your senses, your comfort, and your pocketbook.

Within the next ten years, conservative economists say, we will spend the staggering total of 600 billion dollars on construction, a figure which exceeds the total value of all buildings in the United States today. By the year 2000, which is less than a forty-year mortgage away, we must double all present facilities to meet population needs. That is, we must build a second United States.

Mississippi, in the past, has spent proportionately less on construction than other states. There is every reason to believe that industrial development and a healthier economy will result in our spending proportionately more in the future. As a homeowner, a parent interested in schools, a potential investor, a taxpayer, and a voter, you will be affected by what and how we build even more directly than you are today. Architecture, then, is and will be your business.

Architecture as a profession is practiced in this state by men who in most cases have qualified themselves by a minimum of five years of formal training in recognized architectural schools, followed by a number of additional years of actual experience as employees and associates of other architects.

A profession, as distinguished from the production or handling of goods, is a field of effort characterized by the rendering of service for which there is a common core of ethics, principles, and practices. The true professional is always motivated by far more than the normal desire for monetary gain.

The architect’s services to an owner run the full gamut from the selection of a site, through the imaginative creation of structures interpreted to the owner pictorially and to the builder technically, to the final accomplishment of the finished structure as a useful and beautiful reality.

A high percentage of the architects in this state are members of the Mississippi Chapter of the American Institute of Architects. The A.I.A. delineates the common core of ethics, principles, and practices by which we perform. This publication represents a new effort to present Mississippi architecture to you. We invite questions, comment, and criticism in
the interest of a better architecture.

The Mississippi AIA has  granted permission to reprint the monthly issues on Preservation in Mississippi, making them available to the public again. I have tried to track down Construction News, but have not had any success, so I think I’ve made a good-faith effort to cover all the copyright bases.

Tomorrow, the first article from this inaugural issue–the First Federal Savings and Loan Building, across from the Old Capitol in downtown Jackson.