Home › Architectural Research › Does this mean you hate it, Miss Ada Louise?

Does this mean you hate it, Miss Ada Louise?

I took the opportunity over the holidays to get back into my reading schedule and finish books that I had started during the dog days of summer. One of those was Ada Louise Huxtable’s recent compilation of her decades of essays as architectural critic with the New York Times and more recently with the Wall Street Journal. The book is called On Architecture: Collected Reflections on a Century of Change, and I highly recommend it for its concise yet visually oriented language and clearly argued opinions. Last year, I read Paul Goldberger’s On the Rise, and I found I like this type of book because it gives me a good feel for how buildings were viewed in the moment, not with years of hindsight and comparative research to change opinions. 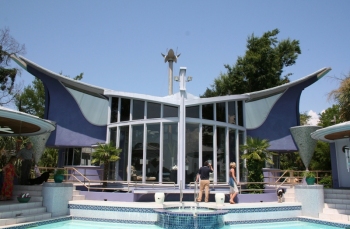 The rear overlooks the Old Fort Bayou and a pool.

Anyway, here I am happily reading through and I come to the essay on Bruce Goff, published February 8, 1970 in the Times, on the occasion of the first major retrospective exhibit of Goff’s work, held at the Architectural League on Sixty-fifth Street. It made me so happy, because as you might remember I’m a big fan of our own little piece of Goffdom, the Gryder House in Ocean Springs. I didn’t necessarily expect to see any commentary about the Gryder House, but I looked forward to reading Huxtable’s view on Goff and his work in general. I wasn’t disappointed on the latter point:

Bruce Goff is a phenomenon, part of an indigenous American tradition of the unspoiled, romantic, land-loving loner that the [Architectural] Review has labeled the American grassroots mythology. This fascinates Europeans and embarrasses Americans. The architects who complete their concrete and steel bank buildings with hard-edge abstraction are made a little uneasy by a man whose tastes run to rusticity, orientalia, peacock feathers, and pink plastic. When he is published by American architectural periodicals, the tone is uncomfortable and ambiguous (p. 300).

But then I see the word “Gryder” coming up in the narrative, and I get a little excited:

The Price House, a chef d’oeuvre of untrammeled, sybaritic fancy in gold-anodyzed aluminum, nylon-carpeted floor and walls, goose feather ceilings, and hanging plastic ‘rain,’ is super-G0ff. Lesser-Goff or pure disaster can be seen in the realization of the sketch for the 1960 Gryder House in Ocean Springs, Mississippi. Here execution turns impossible flying curves into chewing gum and a precisely poised inverted cone into Dairy Queen (p.301).

To paraphrase Admiral James T. Kirk in The Wrath of Khan, “Don’t mince words, Miss Ada Louise, tell us what you really think!”

I guess I’m just not enough of a critic (I remember Robert Ivy’s comment  in his SESAH keynote that the house might be “hard to love”), but I love love love the house, and I frankly don’t really understand what turning “flying curves into chewing gum” has to do with anything. Perhaps Huxtable herself falls into the same class in which she places modernist architects: uncomfortable with the sheer relish, the whimsy, the fun, Goff shows in his buildings, including the Gryder House. Eastern architecture critics may not like that mid-America, and particular Deep South states, might be perfectly comfortable with whimsical fairylands, buildings that seem only childish to minds that (to themselves) are more sophisticated.

I wonder if Huxatable still considers the Gryder House a disaster 40 years later, or if her opinion would change if she actually visited the house? I’m glad that the house has owners who love it enough to repair it after Katrina flooding, and while I hope that the architectural establishment comes around, I guess really it’s Mississippi’s house and we can love and treasure it if we want to, chewing gum or not.