Those of you who love both military history (and really, what’s not to love about guns and tanks and troop movements?) and museums have probably already checked out the Mississippi Armed Forced Museum at Camp Shelby. Camp Shelby, of course, has been the primary training base for the Mississippi National Guard, and Army units too during wartime, for most of the 20th century, and of course, has swelled with troops shipping out to Iraq and Afghanistan since 2001. So it’s the natural location for our state’s military history museum. 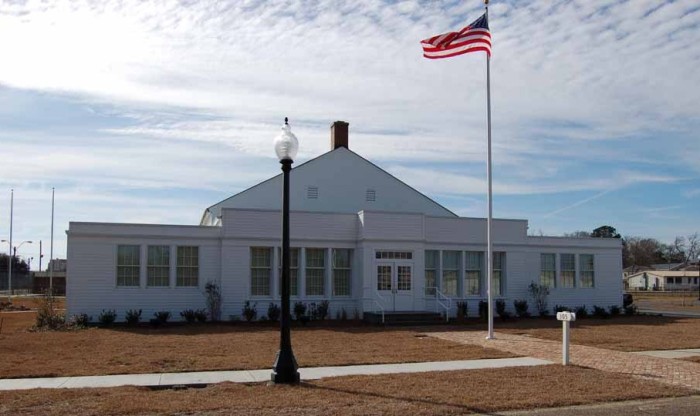 6th Street USO, Hattiesburg (1942). Significant as the only USO club in the state for African American soldiers during World War II, the USO building was recently restored for a new life as community center and museum.

A new museum opened on May 23 in Hattiesburg that complements the story told at Camp Shelby–the African American Military History Museum located in the old USO Club in the Mobile Street neighborhood in Hattiesburg. The grand opening was two weeks ago–ok, I’m a little late with the news, but I’ve had to report on fires and demolitions and such, so I’m just getting around to this–and here’s what the Hattiesburg American had to say about it in their article of May 17:

The USO Club opened in 1942 and was constructed by community volunteers who invested more than 40,000 hours in the project. It is currently the only surviving USO built exclusively for African-American soldiers, and in 2003 it was placed on the National Register of Historic Places.

More than 150 years of African-American military history will be displayed in this interactive museum. Beginning with the Buffalo Soldiers of the post civil war era through modern conflicts like Operations Enduring and Iraqi Freedom, visitors will witness the service and sacrifice of African-American servicemen and women.

Isn’t it amazing that little old Mississippi has such an important place, and even more so that we didn’t destroy it before we realized how significant it is?

Check out pictures of the restoration of the USO building at the Museum’s website (http://www.hattiesburguso.com). While the site doesn’t give any hours of operation, I did my research, as any responsible blogger would, and found that currently they are open by appointment only. But they have contact information, so theoretically, you should be able to set up an appointment pretty easily and take the kids on a day trip to see what the military is all about (well, maybe not all about, but you know . . .)

My very favorite military history museum so far is the Marines’ museum at Parris Island. And just how did Malvaney come to spend time at Parris Island, boot camp for all Marines east of the Mississippi? I leave you with that question to ponder while doing your weekend chores.