Well, it’s been almost 11 months since I did my last news roundup. Life events have intervened in the meantime, but maybe they’ve quieted down enough that I can get back into the hang of it to keep the MissPres universe updated more regularly on at least a few of the latest happenings.

Longtime readers will remember that MissPres questioned the Naval Reserve Center “renovation” project way back when it started, but the local media is just now noticing that the historic front section is sitting vacant after an exterior-only renovation. The back section of this National Register Art Moderne building was demolished for an MDAH records center, at great expense since it is in a flood zone. According to WLBT’s story, “Historic Naval building sits partially renovated,”

Work on the Old Naval Reserve Center in Jackson has been stalled due to a lack of funding. Some are left wondering why the most prominent part of the project, a ship-like structure, has been partially restored with taxpayer dollars, but there are no plans for it’s [sic] use. . . .

Two-hundred-thousand taxpayer dollars were spent on a roof and restorations of original exterior windows and paint. But nothing has been done to renovate the building on the inside.

More questions should be asked about this shady project, including why the state is funding a records center in an area that flooded in 1979, why half of a National Register building was demolished for use by the state’s historical agency, and yes, why the most historic and architecturally significant section is sitting there, as WLBT says, “without a mission, no captain and no crew.”

Jackson Free Press had a nice story about the Lanier High School alumni group’s recent efforts to get the 1952 school listed on the National Register and to help preserve the building with an MDAH grant to restore the steel windows. In “New Day, New Way,”

The Lanier High School National Alumni Association launched a campaign to save the school with the help of its class of 1968. The dedicated actions of these groups exemplify significant pride and loyalty of students who attended the school over the years. Lanier alumni work hard to bring attention to the deterioration of the building and grounds, and to inadequate funding, as well as the lack of support and resources needed for the teachers and staff to meet the needs of the students. Actions taken during the past few years are finally reaping results.

This is a great example of an alumni group working over a period of years with the school district, first to explain the school’s historic significance and the importance of preserving it, and then to identify maintenance issues and help find funding to address them. Maintenance is preservation, and it’s a lot cheaper than trying to save a building that’s been abandoned. Congratulations to the Lanier alumni, and we look forward to seeing the building when all the windows are looking spiffy!

According to the Clarion-Ledger, “Construction on Fondren hotel could start soon.” This news is MissPres-worthy because the proposed hotel is on the former playground of Duling Elementary School, a designated Mississippi Landmark. Although no rendering is in the article (always a red flag),

It will not look like a regular Hampton Inn. Desai said DHG has hired an interior designer in Fondren and an architect who specializes in urban hotels. The goal is for the building to blend with the neighborhood, Desai said. “It will look historical on the outside, and like Fondren on the inside.”

Later neighborhood conversations indicate the MDAH Permit Committee will be looking at the proposal this Thursday (9-18), so maybe we’ll see a rendering at some point soon.

As you may recall, MDAH’s Community Heritage Preservation Grant applications are due October 3, 2014. A few stories from around the state are trickling in about communities who plan to apply: West Point City Hall, Philadelphia’s Police Station (old Post Office), and Meridian’s Lauderdale County Courthouse. There’s still time to get an application in for your local preservation project, but no more dawdling!

Speaking of Meridian, and in the spirit of Suzassippi’s “Before and After” post of last Tuesday, I offer this photo montage of the old Meridian Hotel site. As you recall, this early “high-rise” building right at the entrance to downtown Meridian was demolished back in 2011–wow was that three years ago already??–in anticipation of a wished-for Meridian Arts and Entertainment Museum. I happened to be in Meridian a couple weeks ago and took a few pictures of the site, a nice grassy lot surrounded by a tasteful chain-link fence and black mesh that you can’t see through at all. 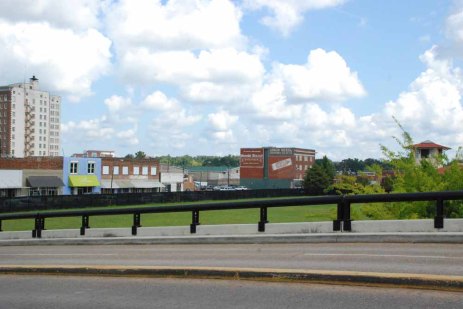 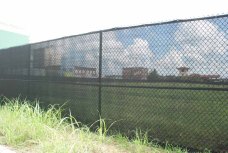 I won’t end on that discouraging note. Take time to head over to the Columbus Dispatch, where Rufus Ward offers part one of a tutorial on Columbus’ Greek Revival landmarks, “The Coming of Greek Revival.”