Travelling by Trolley in Mississippi: Meridian

Today’s post is Chapter 7 in our series re-printing Frank Brooks’ “Travelling by Trolley in Mississippi: Stories about Streetcars,” originally published in 1983. View other posts in the series at the “Streetcars” tab.

In place of the 1920 streetcar map in the book, drawn by Gordon Powers, I have inserted two original streetcar maps from 1907 and 1920. These were provided by MissPreser Nathan Culpepper. The 1920 maps are identical, but the original map sent by Nathan is more clearly scanned than the drawing by Gordon Powers.

Because it has been so long since Meridian had trolleys, my efforts to learn details of that operation have met with very little success. Initial abandonments of the Meridian car lines began as early as 1922 when the Meridian Light and Railway Company took up the tracks of its College line which ran north from Highland Park. The bus service which replaced that trolley line marked the beginning of a trend which would end all streetcar service in favor of busses in September, 1925. 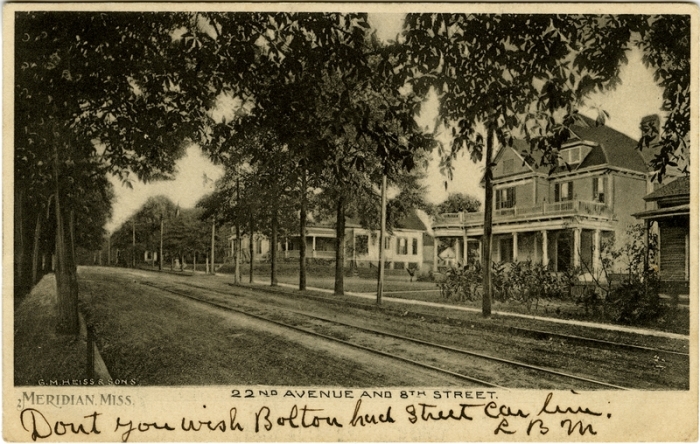 Courtesy of the Mississippi Department of Archives and History, Cooper Postcard Collection

The Meridian Light and Railway Company was incorporated February 22, 1901 as a successor to the Meridian Street Railway and Power Company. At the height of its operations, the M.L. & R. Co. owned 35 cars, 11 of which were trailers placed in use by coupling them onto regular motor cars. Before any abandonments, Meridian’s car lines ran over slightly more than 13 miles of track. I clearly remember about a half block of track still visible alongside the Lamar Hotel during the late 1940s.

My father used to tell a story related to Meridian trolleys which always struck me as being quite humorous. He and his brother, both country lads who lived in Lake, Miss., were in Meridian for a few days during the summer visiting their uncle and his wife. All of the pleasures of the city were at their disposal! One evening their youngish uncle and aunt drove them downtown to attend a movie. The couple gave the boys explicit directions on how to come home by boarding the car signed for route “3” at a particular corner near the theater. Unfortunately, there was a mix-up. The first car to come along happened to be numbered “3,” and that got the boys’ attention to the exclusion of looking more carefully at what route it was traveling.They wound up some distance across town from where their nervous relatives were pacing the floor in alarming wonder as to what might have happened to the boys. To make matters worse, it was the last run of the evening and the car was returning to the barn, and not back downtown. It took some doings by a concerned motorman, who was handy with an available telephone, to get the boys in touch with their relatives who came as quickly as possible to rescue their wards!

When Meridianites voted on a streetcar referendum on July 23, 1925, only 316 citizens voted to retain trolley transportation. Less than six weeks after that vote, busses were already following much the same routes previously covered by the trolleys with the exception of a new business district loop. All busses were routed over that loop to take them past the city’s beautiful new Spanish-mission style Union Railroad Terminal. A new bus line was also established through the southern part of the city where the trolleys never ran. I have been able to locate some photographs showing that most of the Meridian cars were single-truck, “pay within” cars. The Brill Company built the cars which were designed to seat 32 passengers.

from the 1907 Illustrated Handbook of Meridian, Mississippi. Courtesy Nathan Culpepper.