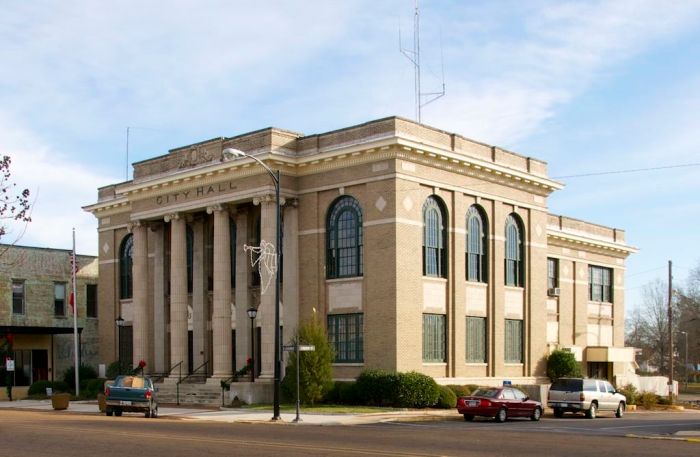 Following up from the last post on the Certified Local Government programs in Mississippi, I will profile the Aberdeen City Hall.  In the 2019 awards by the Mississippi Department of Archives & History for CLG projects, Aberdeen was awarded $15,083.35 for exterior rehabilitation.  In addition to being a CLG, Aberdeen is an accredited Main Street America program.

In 1910, the city began to contemplate the need for a new city hall.

Aberdeen needs a new city hall.  The old structure now constituting the Mayor’s office, etc., is dilapidated and almost in a state of collapse.  It is not commensurate with the needs nor the dignity of the city and besides this is unsafe for occupancy.  The west wall of the building is cracked and crazed until it looks to be a pile of brick set upon triggers that may spring the building to ruin at any moment.  It were well to consider what the city must have sooner or later before a catastrophe happens.   Investigation of the condition of the present city hall, and the expediency of erecting a new were wise at the earliest possible moment.  Aberdeen is able to afford a respectable city hall–the sooner she provides it, the more credit to her people.  That she must have it, time, and short time in our judgement, will decide. (New City Hall, Jan. 14, 1910. The Aberdeen Weekly, p. 3)

A year later, the editors of the Aberdeen Weekly again took to the press to discuss the location of a new city hall.  With “nothing to conceal”, they advocated for the construction of the building “on the logical site” (Mar. 3, 1911, p. 1).  They further asserted that building on the site of the old city hall would “prove a profligate waste of the public funds.”  The city owned the lot on Hickory Street “just East of the Post Office.”  The 1899 Sanborn map of Aberdeen (only one online) indicated a dwelling on that lot, but the city could still have owned it, or the dwelling could have been removed during those ensuing years.  The editors asserted it as the logical site because it was the “logical center of the city”, which indeed appears the case in looking at the map. 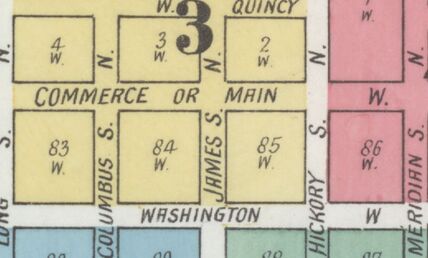 March 10, 1911, the Aberdeen Weekly ran another editorial on the pending bond proposal to construct a new city hall.  The editors took the position that the city should be transparent about the level of debt for the city before voters were asked to vote, and, that the voters should know where the new city hall was to be constructed.

…location of this city hall is a point of animated differences.

In May, city hall plans were approved.  The Weekly reported the architectural style would be Gothic and “present a massive appearance on the beautiful site upon which it will stand” and was projected to cost $20,000.  Lot clearance began in July and by August, was ready and construction slated.  T. R. Warburton was awarded the contract for the heating system, in the amount of $1200.  In September, it was announced Addison Brannin had the contract for construction of the new city hall and the new school for African American students scheduled in the same bond election.  Interestingly, no matter how I searched, I could not turn up an item for William Drago, the architect for the not-Gothic city hall. 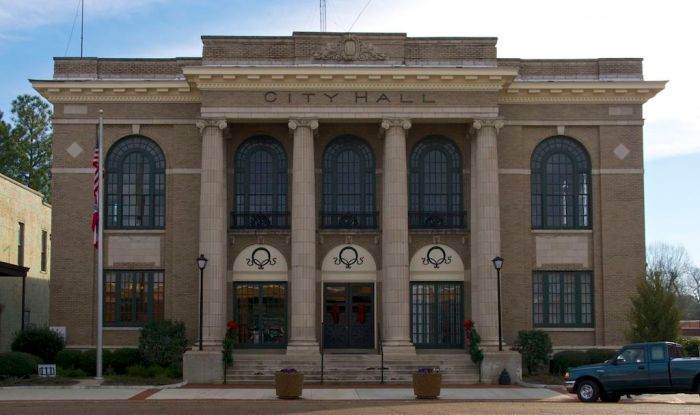 Architect William Drago of New Orleans designed the Beaux Arts, Neoclassical styled city hall, completed in 1912.  Susan Enzweiler said it “ranks as one of the finest early twentieth-century city halls in Mississippi” and is one of the eight in this style in the state constructed during that time period.  The Aberdeen Weekly agreed, in what one might suggest is the “appreciation of historic resources among the general population”–even if they were not aware the resources that were new to them would still be standing in service over a hundred years later.

…the citizens have put forth a special effort to beautify the public buildings and make the streets attractive…the magnificent city hall with all of its modern appurtenances, the handsome post office, which would do honor to cities much larger than ours, and the beautiful Elks’ Home and recently remodeled hotel, of which few cites the size of Aberdeen can boast. (April 14, 1916, p. 4)

Aberdeen with Commerce street newly graveled, the City Hall treated to a fresh coat of paint adorned by surrounding grass plots and flower beds together with its white way, will soon present a most pleasing appearance. (April 14, 1922, p. 5)

The “white way” referred to the electric lighting systems being installed across towns and cities in the US, including in Mississippi. 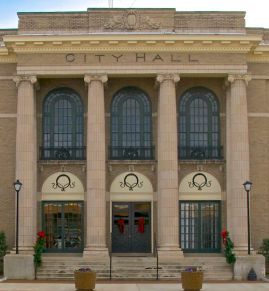 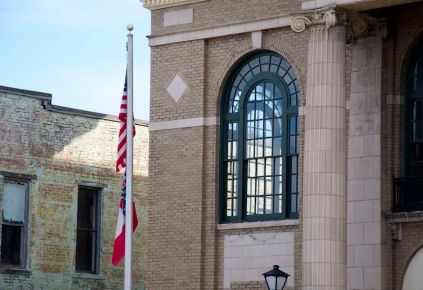 Aberdeen has been the recipient of CLG awards in 2009, 2011, 2015, and 2016 previously for repair, restoration, and assessment and continued work on the M & O Depot, to add historic district signage, create a walking tour brochure for the Silk Stocking Row historic district, design guidelines for local historic districts, and complete historic resources survey and National Register historic district nomination for Mattubba Street from Commerce to Highway 45.

Check out W. White’s A Look at a Few Historic Buildings in Aberdeen from September for more on Aberdeen.