Today’s article takes us back to the grand opening of what is today known as University of Mississippi Medical Center, or UMMC for short, or UMC for even shorter. This institution has become so woven into the fabric of health care in Mississippi that we forget what a major step it was for the state in the 1950s. As the article explains, it was the top of the network of medical facilities created with funding from the Hill-Burton Act, which brought public health clinics and hospitals to most counties in the state after World War II. The original hospital section of the now-sprawling medical center has been recognized by MDAH as historic, with the focus on preserving the International-style exterior and some of the more significant interior spaces. Read more about the building on the MDAH Historic Resources Database. 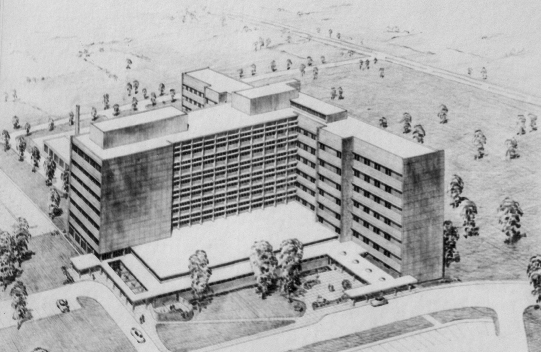 A milestone in medical history for Mississippi will be reached July 1st with the opening of a new $9,000,000 University Medical School and Teaching Hospital in Jackson, the first of its kind in the history of the state.

Completion of the magnificent plant in North Jackson after almost three years of work and a vast amount of preliminary planning gives Mississippi a school and hospital second to none. The new medical center is expected to serve as the heart of a system of local and regional hospitals provided in recent years to bring modern medical science within the reach of everyone.

The project, one of the final links in the long range war on disease and sickness, not only will train doctors, nurses, and other hospital technicians for the fight but will provide a center of research, education, prevention, and patient care.

The teaching hospital itself, part of the carefully studied over-all planned facilities for a modern medical college, is Mississippi’s largest, boasting 355 beds and facilities for the care of 50,000 outpatients annually.

The patients from the nearby Charity Hospital in Jackson will be the first to occupy the spic-and-span facilities.

The school itself, providing the first 4-year medical course ever offered in Mississippi and under supervision of the University of Mississippi School of Medicine, which was established in 1902, will matriculate 32 junior students at the beginning of the Fall term. The school eventually is expected to provide facilities for over 300 student doctors.

Mississippi’s doctor shortage, especially in remote rural sections, has been acute for many years and inspired a state-supported scholarship plan for financing physicians upon the condition that they return upon graduation and practice for a required time in a rural community.

Although the state has conducted a highly successful and widely recognized health program for years, the serious shortage of hospital facilities was brought to light in 1946 through a survey which showed a shocking shortage of beds.

Recognizing the emergency, the legislators in 1946 appropriated funds and set up the Commission on Hospital Care to undertake a remedy through federal funds made available under provisions of the Hill-Burton Bill.

Since that time scores of new hospitals and medical centers have been established, increasing the number of beds in every section. The average Mississippian today is within 25 miles of hospital facilities.

The scheme of the hospital program in Mississippi has followed as nearly as possible the practice of taking the hospital to the patient rather than trying to bring the patient to the hospital. This system provided the rural, then the regional hospital, and now the medical center in Jackson. Thus the doctor can have facilities at both the local and regional level, and patients can enjoy the benefits of local treatment plus the advantage of higher level research, skill and highly specialized medical care.

The growing need for the medical school and base hospital as the core of this system was recognized by the legislature in 1950, at which time an appropriation of $4,000,000 was voted. To this sum was added $3,000,000 of federal funds and $1,500,000 of Hinds county funds for construction of the teaching hospital.

In order to make Mississippi’s new school-hospital one of the best in the nation, the State Building Commission, which administers state fund; the Commission on Hospital Care, a special advisory committee of physicians; and an association of architects worked hand in hand in studying and planning the huge project.

Also working closely with the state agencies and the architects was a special advisory committee composed of a representative of the State Medical Association, Dr. Temple Ainsworth of Jackson; Dr. David Wilson, of Jackson; Dr. D. S. Pankratz, dean of the University School of Medicine; and the late Dr. A.C. Bachmeyer, former director of the Medical Clinic of the University of Chicago.

A thorough and careful study of the needs of the school and hospital was made. Experts in every field of medicine and hospital administration were called in, and hospital and medical schools from California to the East Coast were visited and inspected.

The entire building, an integration of the Medical School with the Teaching Hospital, contains 468,000 square feet of floor space, 224,000 of which is allocated to the school, and 212,000 to the hospital. A 32,000 foot service building is attached by a tunnel.

The Medical School consists of eight departments, each major department containing a student laboratory and large lecture room. A library is situated on the second floor.

The school and hospital have been set up to provide facilities for (1) care of patient, (2) education, (3) research, and (4) prevention.

The outpatient department, capable of handling 200 person per day, will include medical and surgical facilities, obstetrics and gynaecology, pediatrics and specialty clinics for eye, ear, nose, throat and dental patients.

The hospital portion of the building contains 350 beds, half of which by law must be used for charity cases. Six nursing floors, each with two nursing wings accommodating 30 beds each, are included. The surgery section on the second floor provided 10 operating rooms.

A central sterile supply and laboratory serving surgery below occupies the third floor, and obstetrics suites are situated on the floor above, with 48 bassinets for the new born nursery, 16 incubators for a premature nursery, and 3 bassinets in isolation nursery.

Emergency patients are received in a large emergency department accessible on the ground floor by ambulance and automobile. An X-ray department completes medical facilities.

The impressive building is located on an elevated area on a 44-acre site in near North Jackson on state-owned property at one time occupied by the State Hospital for the Insane, now at Whitfield. It is conveniently located at the junction of U.S. Highway 51 and North State Street. 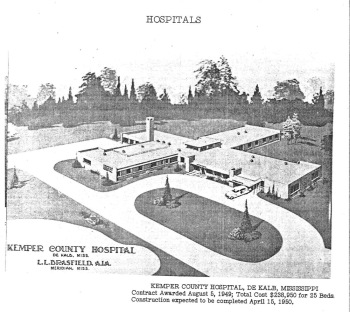 Hill-Burton Before and After: Kemper County Hospital 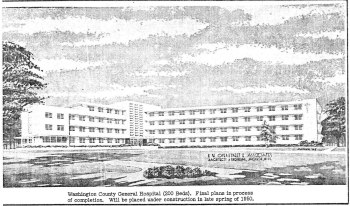 Hill-Burton Before and After: Washington County Hospital 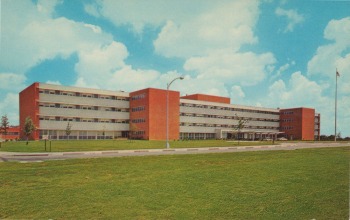 Mid-Century Mississippi: To VA Hospital or Not? 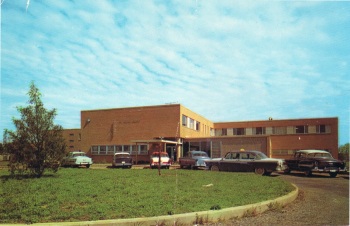 Newspaper Clippings: Hospitals in Every County 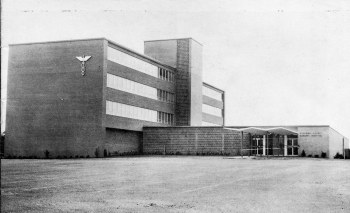