Readers know I have this love & admiration thing with iron columns, pilasters, and other iron architectural elements.  I spotted a few new-to-me designs in Greenwood, and wanted to continue the focus on that town’s historic architecture.  There are 16 iron pilasters and/or supports on the buildings above, for example, not counting the supports on the balcony.

Scherpe & Koken were proprietors of the Enterprise Architectural and Ornamental Iron Works & Foundry of St. Louis, MO. In an 1887 catalogue, Scherpe & Koken were at South 8th, Park Avenue, and Barry Street.  You can download a copy of the catalogue for free, and it has beautiful illustrations of the available designs.  In 1891, they were located on Old Manchester Road and Chouteau Avenue.  Koken apparently bought out Scherpe as an 1894 article indicated that Scherpe, recently the senior member of Scherpe & Koken, was arrested on complaint by his wife that he was insane.  However, the examining physician ruled no evidence of unsound mind.  On November 21, 1894, John Frederick Scherpe killed himself in his office.  He had been living with his sister, estranged from his family, for around three months, since the arrest.  William T. Koken died in 1901 while bowling.  He was 50.

The Price-Evans Foundry Company operated out of Chattanooga, Tennessee.  I did not find much about the company online or in the newspapers.  The earliest mention I located was 1890, with others in 1901, 1917, and into the 1920s.  The Iron Tradesman, August 1917 issue featured an advertisement for “architectural castings, structural steel, elevator enclosures, stairways, fire escapes, wire work, and All Kinds of Builders’ Iron Work.”

Over a hundred years later, we might not think about the dangerous work that was involved in producing these beautiful and structurally important elements.  One of the few items I found on Price-Evans was in the story of Roland Hayes: The Legacy of an American Tenor, by C. A. Brooks and R. Sims.  Hayes as a 14-year old African American boy who went to work for Price-Evans in 1901 for 80 cents a day.  He worked with an adult man, loading iron from the freight yard and then assisted in the melting and molding to create iron door and window weights.  Young Hayes wore brass-tipped brogans without shoestrings so that he could kick off his shoes easily if molten iron was spilled.  His feet and legs had permanent scars from being hit by hot iron flakes.  A couple of years later while he was working for the Casey-Hedges foundry, his clothes became entangled in the conveyer machine belt and he was pulled into the machinery and pulled through it three times before it could be stopped.  Amazingly, he lived, and was sent home in a full-body-cast where he required ten weeks to recover. 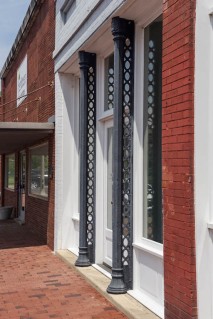 I confess this column stumped me, and it took over six painstaking hours to ferret it out.  Sometimes when you are just snapping photos, you miss details at the moment.  This is a great example for paying more attention.  When I got ready to identify this column’s origins, imagine my surprise when no letters seemed to make sense.   Finally, I realized the column words seemed backwards, and ultimately, realized it was installed upside down.  Because it has been painted ??? years, it took quite a while to decipher the column was from the Chickasaw Iron Works of our neighbor, Memphis, Tennessee. 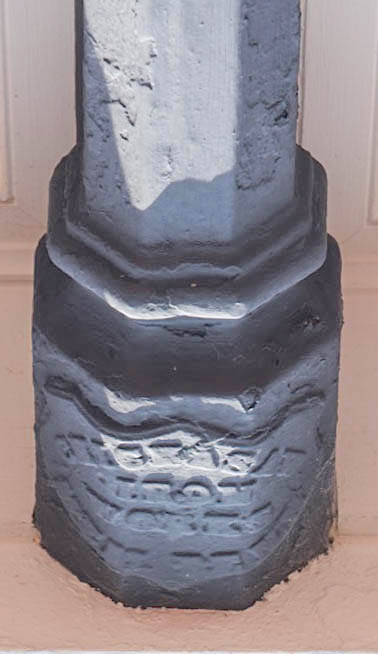 Chickasaw Iron Works–what seems obvious now was not looking at the original photograph.

Beautiful–if in need of repair–iron pilasters are also on the former Kitchell aka Midway Hotel.

The Maintenance and Repair of Architectural Cast Iron

MissPres Architectural Word of the Week: Pilaster
Stepping on Jackson, Mississippi in NOLA