Today’s featured newspaper clipping notes the introduction a convenience we take for granted today.  If you’ve ever been hot and sweaty working on a project and had the frustration of needing one more widget or sprocket to finish said project on a Sunday afternoon, an air-conditioned home improvement store can be a godsend.  In his book Building a Market: The Rise of the Home Improvement Industry, 1914-1960, Richard Harris cites local lumber dealers as the primary precursor from which modern home improvement stores emerged.  The Hill-Behan Lumber Company can be seen as one example of this type of store.  According to the obituary of William L. Behan Jr.,

In 1970 Hill-Behan decided to expand into the Biloxi-Gulfport market with the construction of a store on Beauvoir Road.

FIRM TO OPEN IN BILOXI

Hill-Behan Lumber Company will open a new business in Biloxi in September, offering a new concept in building material merchandising.

The building is now under construction on a 10-acre site fronting Beauvoir road between the L&N Railroad and the Jefferson Davis Shrine.

Dennis Behan, vice president and general manager, pointed out that 11,200 square feet of the 19,600 square foot building will be air-conditioned.

The air-conditioned area will include a show room area.  Hardware items, paint, and wood products sold by Hill-Behan will all be under the same roof, Behan stated.

Behan said the structure will be a wood building with cedar shake roof in the front, built with attractiveness in mind.

The building, which will cost $82,000, has been under construction about a month,  and Behan said, “We hope to be opened in the early part of September.”

This will be the 25th such business of Hill-Behan in operation in the St. Louis, Chicago and New Orleans market areas, according to Behan.

He also noted the company owns and operates its own sawmill in Brookhaven, Miss.

The store would also sell tools.  Stylistically, the building seems to follow a corporate design for all Hill-Behan stores of the period.  This store opened just shy of a year after Hurricane Camille hit in August, 1969, so there was certainly a market demand for the firm’s stock in trade.  In 1970 the competitor chain Builder Square, then known as Home Centers of America was founded, and 1971 was when Handy Andy Home Improvement Centers opened their first expansion store.  It certainly seems to be a time period when this new type of retail was flourishing.  I believe Hill-Behan would also open stores in Jackson and Brookhaven.  Does anyone recall other Hill-Behan stores in other parts of Mississippi? 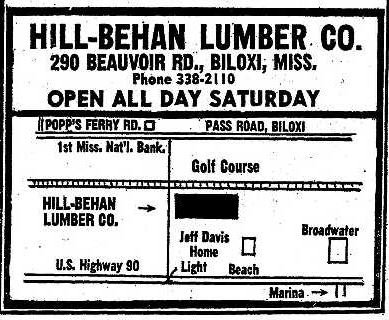 When the Hill-Behan Company closed in 2001, the chain had been reduced from thirty-some stores down to eleven stores. I don’t recall that the Biloxi store was one of those, having closed earlier.  For as long as I care to remember this structure has been for sale or lease.  For being a decorated shed, the building still is impressively intact, retaining its mansardic facade, cedar shingles, and signage.  As this building is only a few years away from reaching the “magical” fifty-year mark for being eligible for inclusion on the National Register of Historic Places, what do you think its chances of survival are?  Do you remember your first experience encountering a store of this type?