In July of 1945, the Hattiesburg J.C. Penney store at 122-126 W Pine Street suffered a significant fire.  This provided an opportunity for the company’s branding efforts to be put to use with a complete rebuilding of the store.  Sixteen months later in December 1946, the replacement store described by the Hattiesburg American as “Ultra Modern” was opened to the public.  The more period publications I read, “Ultra Modern” seems to be a term often used to describe an International Style building.  “Ultra Modern” did not seem to be related to any of the amenities that the store had, such as air conditioning. 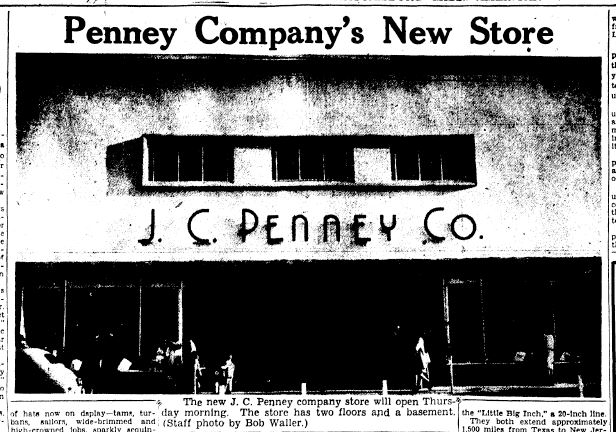 The two-story structure with basement cost $450,000 to erect.  The hand of the J.C. Penney Co. construction department can been seen in details such as the centered entrance and the three windows centered on the second story.

The Hattiesburg American reported the opening of the new store 70 years ago this December….

“Work began on the new Penney store slightly more than a year ago. Plans and specifications were prepared by the construction department of the J. C. Penney Co. in conjunction with Landry, Matthes, Olschncr and Associates of Hattiesburg.  Glenn and Hamilton were the prime contractors.  Air-conditioning was by Air-Conditioning Engineers, Inc., of Mobile.  Carpeting was laid by the Wilson Carpet Laying Co, of Atlanta.  Electrical work was by Doughty Electrical Co. of Hattiesburg.  The building is leased from Sam B Eisman and Harry Botnick of Hattiesburg, owners.”

Congratulatory Advertisement for Air Conditioning Engineers Incorporated of Mobile Ala. From the Hattiesburg American, Dec. 4, 1946

International Style building AND air conditioning! Truly a progressive business, just ignore that the dressing rooms are separated by race and that athletic clothing for women is a novelty.  This building was demolished during the late 1980’s or early 1990’s for a parking lot.

I was hoping that this Hattiesburg J. C. Penney design would lead us closer to discovering the author of the Jackson J.C. Penney building, but so far no such luck. 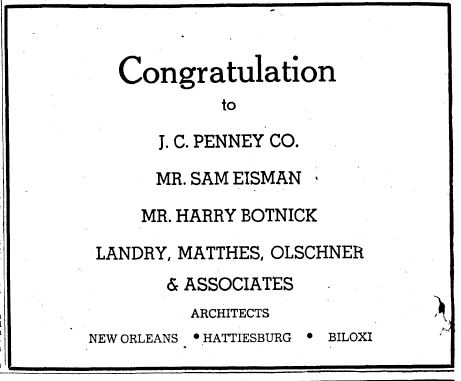