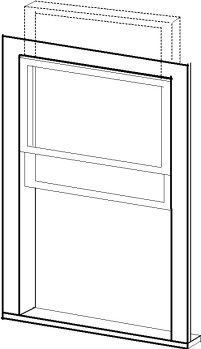 Example of a Box-head Window. Author’s rendering. All apologies to Brunelleschi and Francis Ching.

A topic I found very interesting came up recently in the Vernacular Architecture Forum list-serve. The discussion was about a Box Head style window. The Dictionary of Architecture and Construction defines a box-head window as the following:

Box Head Window:- A window constructed so that the sashes can slide vertically up into the head (or above it) to provide maximum opening for ventilation.

Many of the definitions of the box head window state that it is designed to maximize ventilation, and the ability to pass through the building was only lagniappe. I had always known this type of window as a sliphead window but the definition of sliphead window specifically relates to only the upper sash of a window being allowed to slide upward:

Sliphead Window:- A window in which the upper part of the sash slides upward through the head of the window frame.

Other readers provided documentation that the window type also carried the byname Jib Head window. Surprisingly none of my dictionaries have an entry for jib window, for this or the other, more typical use of the term jib window. Using the Google Books feature of Google I was able to search all three terms to find when they were used in print nomenclature. Box head window appears to be a term primarily used c.1850-c.1900. Sliphead window and to a lesser extent jib head window were terms used after 1900. These were not all-inclusive searches and all terms showed up in each century.

On the Mississippi Gulf Coast, two structures with box head windows both dating from c.1894 that spring to mind are in Long Beach’s W.J. Quarles House and Pascagoula’s Krebs House. Both are interesting case studies into the use of this window type, and the MDAH HRI database has great photos of these houses under rehabilitation. The W. J. Quarles house is a side gable two-story structure that allows lots of space for a tall lower sash. As can be found with many box head window sashes the lower sash will be twice as tall as the upper sash. The Krebs House is also a side gable structure but it is only one story tall. With less clearance in the wall to be able to accommodate a box head window with maximum ventilation, the builder chose to use sashes that were both the same height and allowed both sashes raise up into a cavity. 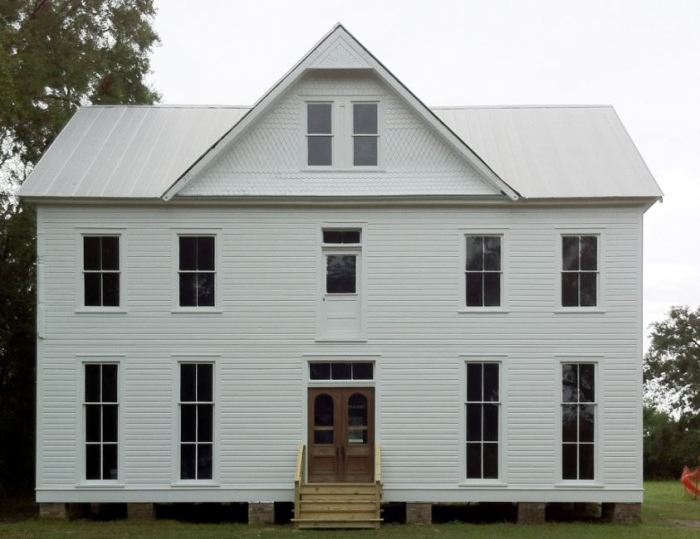 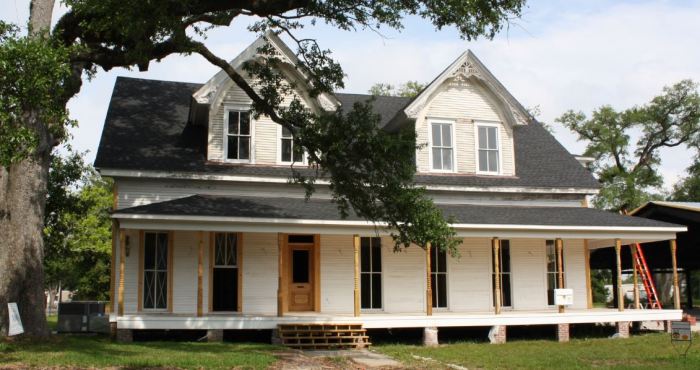 Krebs House Pascagoula, Jackson County. JRosenberg, MDAH 5-6-2009 from MDAH HRI accessed 4-1-2014. Note that both upper and lower sash are equal height. Additionally, note that both sashes are raised in the open window (second from left).

Relating back to the VAF discussion, I was surprised to learn that the design was being implemented into the 1920’s and even into the mid-20th century, but it sounds like as time progressed the window openings typically got smaller. The question originally posed was regarding an 1883 structure with windows that are 3′ x 10 1/2′. The W.J. Quarles House windows are 2’6″ x 9′ 6 1/2″. I don’t have measurements for the Krebs House windows, but I believe the openings are roughly the same size. The examples I found dating from the c.1920 appear to be small double hung or single sash windows where ventilation was the primary concern (i.e. bathrooms). 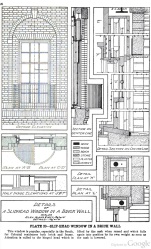 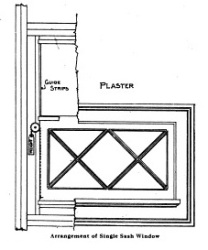 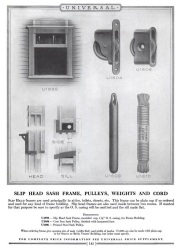 Two of the above examples come from the 1911 Radford’s Portfolio of Details of Building Construction. In the book, William Radford appears to distinguish between sliphead and a jib windows by noting that a jib window has a single sash and a sliphead window has two sashes that are both capable of sliding up into the wall cavity. Interestingly enough, Radford’s sliphead window details are part of a solid masonry structure. William Radford was also Editor-in-Chief of the magazine American Carpenter and Builder, and his definition of a jib window as a single sash carries over to that publication as seen in the 1912 AC&B example above.

The earliest use I came across of the term ‘Box-head” in relation to a window was in the 1869 Woodward’s National Architect by George E. Woodward. For Design No. 1, Mr. Woodward produced a plan that instructed carpenters to:

“Make the mullion window frame in parlor front, with box-head, and all other frames throughout, (above the cellar,) the usual box frames for double hanging the sash, with 2-inch best pulleys, iron weights and hemp cord.” 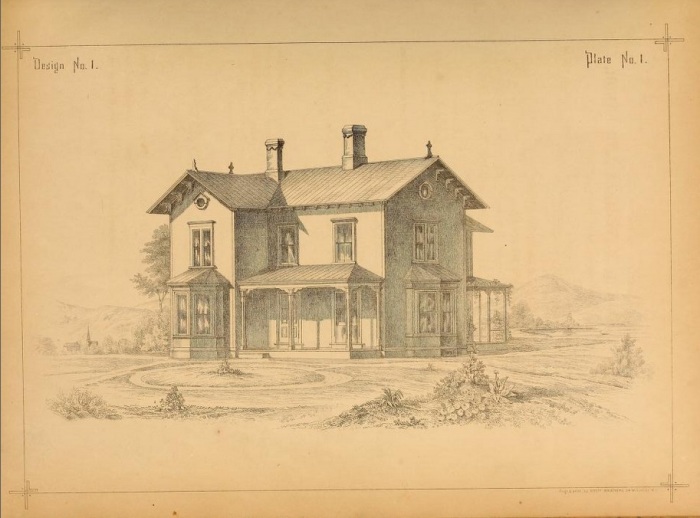 My initial thought is that the window type evolved as part of a clever creation of the balloon frame, but Design No.1 is of 8×4 and 6×4 braced timber frame. Both Woodward’s Design No. 1 and the 1875-1876 Beck House in Vicksburg share strong features of the Italianate style. While the houses have enough differences to clearly indicate the Beck House is not based on Woodward Design No. 1, I wonder if those porch windows on the Beck House have a Box-head component? Unfortunately, the rather descriptive National Register Nomination does not fill us in on that detail 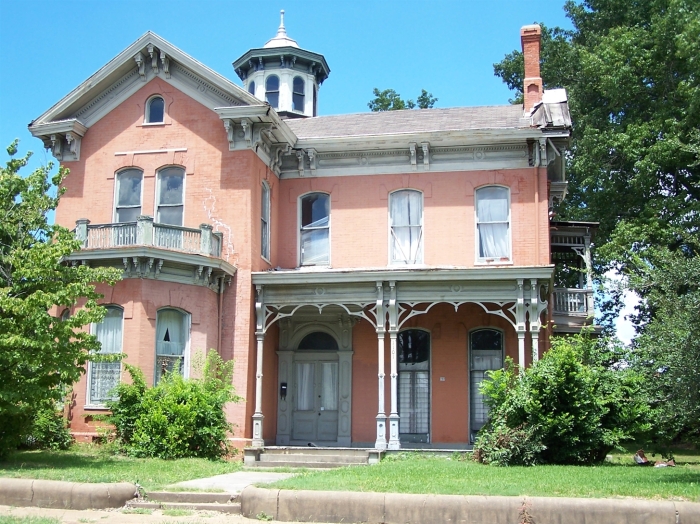 Another reader of the VAF post suggested the term “pocket window.” Malvaney and I snickered that anything in a pocket with a hole in the bottom would only fall out, but sure as day Cyril Harris’ dictionary did have the following definition for a pocket-head window:

Pocket-head window:- A window in which a part of the sash slides upward through an opening in the head of the window frame.

A true pocket window might rather refer to the side sliding concept, in the same manner as a Pocket Door.  The example of a pocket window can be seen in the c.1877 Scooba, Miss. Laborers cottage George Palliser design.

“The arrangement of the windows is one of the principal features in the design. The lower sashes are arranged to slide into the walls, and the transom sash to swing. In this way the whole of the windows can be opened instead of half, as is usually the case. The rooms are all well supplied with windows, and from their arrangement, if there is a breeze, a good draught will be obtained.”

Since these windows did not open on to a porch, their opening was most certainly not meant for passage. It’s possible that this sliding window is utilized because it requires little or no hardware when hardware may have been a luxury. I’ve seen this type of window in utility areas like garages or in small industrial structures. In these environments hardware simply might not have been necessary or may have been too easily broken. 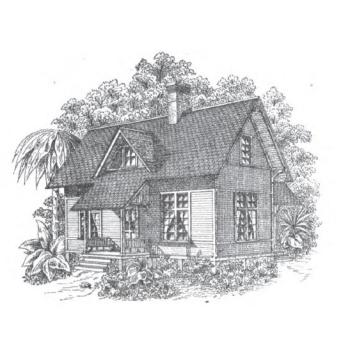 So there’s a rundown of some window definitions. Do you know of another term that is used to describe the types of windows seen in this post? Or do you know of a structure with a window that operates in this fashion? If so share it with us and let MissPres know what you see in your neck of Mississippi.