My first trip through Holly Springs was in the fall of 2003, on my way to Memphis.  I was fascinated by the Square, and Mississippi Industrial College, and vowed to return.  Although I finally made my first visit to MIC in 2009, it was only a few weeks ago that I was able to check out some other parts of Holly Springs.  I had no idea of the history (and historic buildings) this little southern town claimed.  Once again, here’s a stop on the road trip to Suzassippi’s Mississippi: a summer long visit to a few places that did not, and some that did, make the “101 Places in Mississippi to see before you die” list. 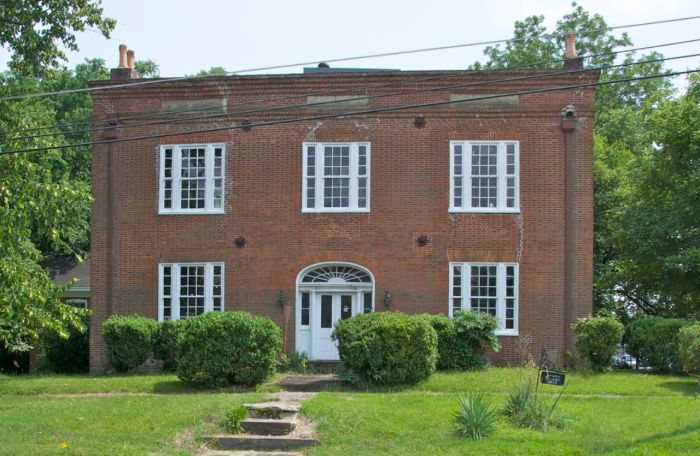 The Mississippi Department of Archives and History Historic Database Inventory described it:

…distinguished by a fan lighted entrance and tripartite windows.

In his essay for The South Reporter, Dr. Milton Winter recalled:

Holly Springs got its lindens from the generosity of one of our town’s 19th century mayors, Henry E. Williamson.  The Williamsons bought the interesting old home…now known as Linden Terrace…linden trees are still in the yard at Linden Terrace.

Not being a tree expert either, I am not certain which trees in the yard are linden trees, but these near the side entrance appear similar to photographs of linden trees.  There is the aromatic European linden tree,  and the common linden tree found in the US, which Dr. Winter called “dull.”  The prized European lindens were brought to Holly Springs.

The Seessel family lived in Linden Terrace in the early 1900s.  Some time after their son died in World War I, the family moved to Memphis to open Seessel Grocery (according to the Seessel family history, Lois Swaney Shipp, The South Reporter, 2012). The front entrance is currently not in use and the hall is filled with items appearing to be in storage; a tiny sign directs one to the side door.  Wonder what’s happening in historic Linden Terrace?