Work on the restoration and renovation of Mound Bayou’s Taborian Hospital–slated to become the Taborian Urgent Care Center–is finally making visual progress after several months of planning and development.  The plywood is off the doors and some of the windows, in order for the environmental assessment and abatement teams to be able to see, and the hospital is cordoned.  The environmental assessment has been completed and they are currently doing abatement. 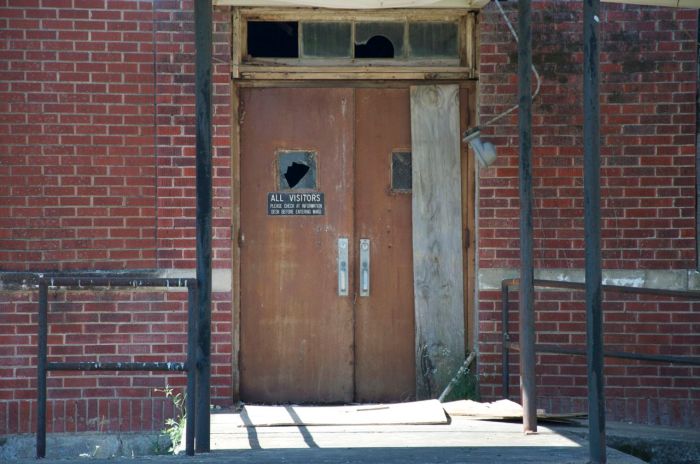 In the partner’s meeting last week, the architects–Canizaro, Cawthon, Davis out of Jackson–were present and it was exciting to sit at the table with them and hear updates and plans.  They will be surveying the building in the next few weeks, and plan to hire a high school student who is interested in architecture or engineering to assist with the survey.  I was impressed that they are supporting the spirit of the community’s vision to develop not only economically, but the community’s people and their skills.  One goal of the project is to use as many local residents as possible in any work that is done.

On a side note, the firm was established in 1938 by James T. Canizaro, who designed Oxford’s Flamingo Apartments, and a unique modernist city hall, which was demolished in the 70s, apparently because modernism did not fit the community’s cherished architectural styles.

There was an elderly gentleman standing under a shade tree just outside of the hospital as I pulled up.  I walked over to him and asked, “Did you ever think you would see this hospital open again?”  He said he did not, and that he “hoped they would do something useful with the building.”  I explained that the hospital was being renovated, and would re-open as a clinic within the next year, and that was why they were working in the building now.  He said he had been an ambulance driver for the hospital until shortly before it closed, and that as a young boy, he remembered when the hospital was built “during the early 40s.”  Would you be interested in sharing your story with us?   He said yes, so we will be working with him soon on the oral history project related to the Taborian and the Knights and Daughters of Tabor.  Can’t you visualize him backing the ambulance up to the unloading ramp?

The last three photographs were taken at the end of April, just as the environmental assessment had begun.  This picture was taken through the front door just prior to cordoning the building; entrance into the building is prohibited without permission and protective clothing and gear.   As work continues, so will the updates.