Travelling by Trolley in Mississippi: Hattiesburg

Today’s post is Chapter 4 in our series re-printing Frank Brooks’ “Travelling by Trolley in Mississippi: Stories about Streetcars.” View other posts in the series at the “Streetcars” tab.

The Hattiesburg Traction Company, at its peak of operation, radiated from downtown Hattiesburg in 5 directions. One line traveled northerly out Mobile Street to a terminal at 7th and Bouie. The Main Street line ran northwesterly to 8th Street to the area of the Hercules Powder Company; and in the opposite direction cars ran out Bay and Edwards Streets to a terminal on Tuscan Avenue at Cherry Street by the campus of the Woman’s College. A line running due west from downtown proceeded on Hardy Street to the Teacher’s College, and another line traveled southwesterly on Pine Street to Florence, with a switch at 2nd Avenue to take the cars home to roost in the barn located at Elizabeth Avenue and Dabbs Street. These car lines covered the city of Hattiesburg remarkably well. They totaled 8 miles of track served by 12 motor trolley cars, 1 trailer and 3 work cars. As was the situation of most Mississippi trolley operations, the Hattiesburg track was of standard gauge and the electric power was 550 volts d.c. 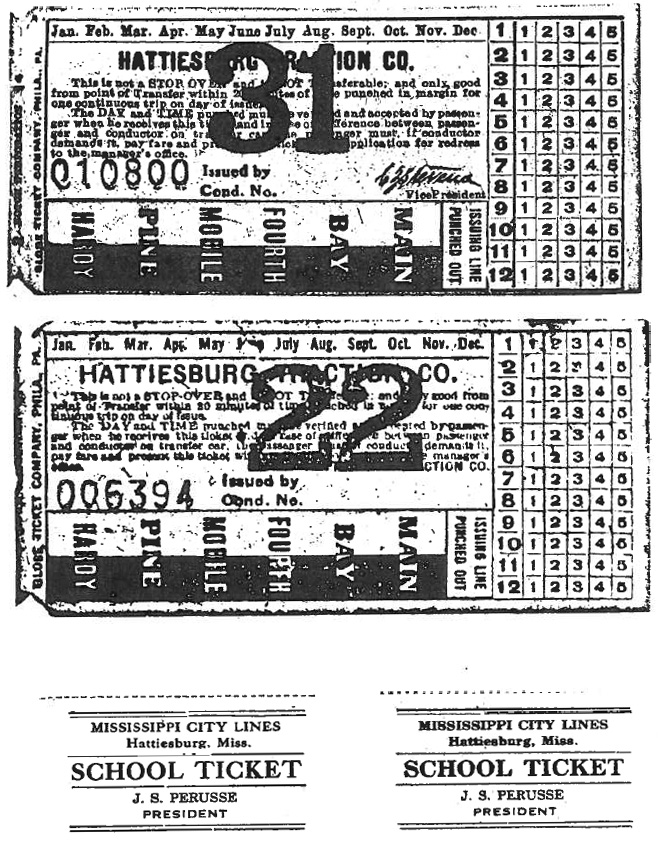 In June of 1913, a bright young man named Stuart C. Irby moved to Hattiesburg to become manager of the Commerce Department of the Hattiesburg Traction Company. Later on, he was to become a well-known and highly respected citizen of Jackson. However, his flare for originality was already beaming and one of his promotional schemes related to the trolley system of Hattiesburg serves to confirm that fact. Irby decided that it was a grand idea to use the traction company for promoting the use of electricity in general. The first way he implemented his idea was to write, from time to time, a column in the Hattiesburg newspaper which he called “Taking the Mountain to Mahomet–Electrically.” Another promotion he devised involved the use of an open trolley car. Under Irby’s supervision, the seats were removed from the car and it was converted into an attractive salesroom, inside of which was displayed every kind of electrical appliance then available. The outside of the car was gaily decorated with flags, red, white, and blue bunting; and many bright lights.

Each day during “America’s Electrical Week” in Hattiesburg, the unique car was stationed at the end of one of the lines or on a turn-out track where all the people in the neighborhood came in large numbers to visit and inspect the displays. They greatly enjoyed the free demonstration of the electrical appliances. Toast was made on toasters and served to the visitors. Music was provided by playing records on the new-fangled Edison electrified phonograph. At night, the car was brilliantly lighted and displayed on a turn-out track in the middle of the downtown area. Hundred of people visited the car where they saw rugs cleaned electrically, clothes washed electrically and many other things! As a result, a large number of appliances were sold. One can be sure that the traction company profited greatly in terms of good will because of Mr. Irby’s keen and well-planned project.

Financial losses plagued the Hattiesburg system and the inevitable cutbacks began in 1922. During that year, the city commission allowed discontinuance of service on the Mobile Street line. The transit situation grew worse, and on June 30, 1925, the citizens of Hattiesburg voted to replace their streetcars with busses. Mayor Moore and commissioners Estes and McAulay issued a statement to the effect that “the transportation problem had been investigated from the standpoint of giving Hattiesburg a modern system, making that system conform to the good roads building program and overcoming the losses from operation of the streetcars.” 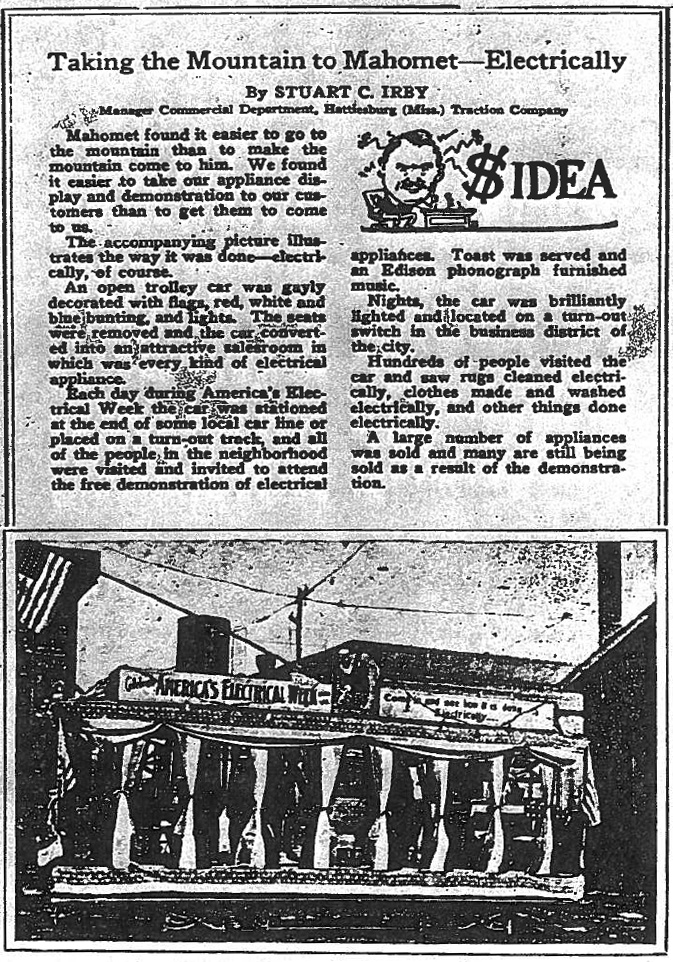 In charge of a new business for the Hattiesburg Traction Company, Stuart Irby wrote a regular column for the local newspaper promoting better ways of using electricity.