I know lots of people claim to be eager to see the death of paper news, that old dinosaur, delivered to your door each morning to be read with a good, healthy breakfast. They say that the internet can take the place of newspapers more efficiently and can cover a wider range of topics more effectively. They say we’re entering a new era of instant and accessible news that covers all the millions of topics we humans are interested in.

We may have more information than we ever wanted about various entertainers and famous national figures, but down at the local level, the nitty-gritty where the rubber meets the road, and–more importantly for our purposes– where buildings are designed, built, and demolished, the coverage ranges from spotty to non-existent. This is true even of the newspapers that are still going–as Frank Ezelle has pointed out on his recent post “Weighing in at 2.6 oz–the Soon-to-be-defunct Clarion Ledger“, the Clarion Ledger has shrunk alarmingly over the past year or two and now consists of a few staff articles and lots of stories off the AP wire (I say “AP wire” as if I know what I’m talking about, but in fact, I have no idea how the AP works).

I was particularly impressed (and depressed) with the potential loss of historical documentation that newspapers have traditionally provided for their local communities when I spent a little time at the archives recently scrolling through the various Jackson papers looking for the obituary of Emmett Hull in October 1957. Well, the obituary, once I found it, was disappointingly brief for such an important Jackson architect, but the articles dealing with architecture I found just browsing through a few days of articles brought home to me the level of detail about local, daily matters newspapers used to cover. Yes, there are still locally focused papers like the Northside Sun or the Jackson Free Press but they tend to be weeklies and the stories tend still not to spend much time on architecture, except for the major building projects. Maybe this is because most common buildings going up are so bland and/or poorly constructed that the editors consider the whole topic too depressing to look at.  What I do know is that researchers in 30 years will have a harder time finding out about buildings built in the 1990s and 2000s than they will those from the 1950s and 1960s.

Here are a few examples of the kinds of meaty little nuggets I came across in October 1957:

Oct. 22, 1957, Jackson Daily News: Ok, seriously, could you buy a better headline than this? Smutty Buff? And maybe it was a slow news day, but can you imagine on any day a reporter of today showing up to a meeting of the successor to the State Building Commission, the Bureau of Buildings and reporting on the extended discussion over what brick color would be used in a new building? I really love the insights we get into R.W. Naef's personality with his quotes. I wish I had a picture of Naef here to post because in the picture I've seen he looks like a kind, intelligent, and humane gentleman, and these quotes seem to fit that description. And the discussion tells us lots about the various brick companies in the state and the personalities of the commission members too: "I don't see any kind of spirit in that brick." 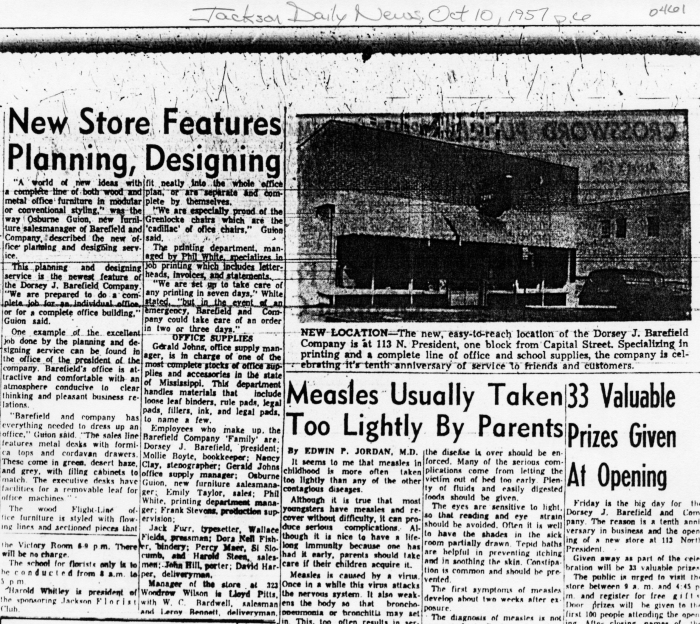 Jackson Daily News, Oct 10, 1957: Here's a lot of ink expended on a small Modern building on N. President downtown. I've always wondered about the history of this building, and now I know a lot more than I did. I also get a photograph that is a lot better in the original (the copy proves my point about microfilm printers being really horrible for quality photographic copying).

I think businesses used to use their buildings in their advertisements alot more than they do now, which of course, makes architectural historians happy, oh so happy. This building is on Meadowbrook, across from the old McRaes shopping center and it's now painted pink, which I enjoy. I guess I had always assumed it was a 1960s building, but this ad proves me wrong (for once).

Try as you might, you’ll never find such everyday wonders of community news and documentation in our new online news business or even in the blogosphere, and while the news may be accessible on your laptop, iPhone, Blackberry, Kindle, etc, it’s still not accessible enough for me to read while sitting in my kitchen eating a healthy breakfast.